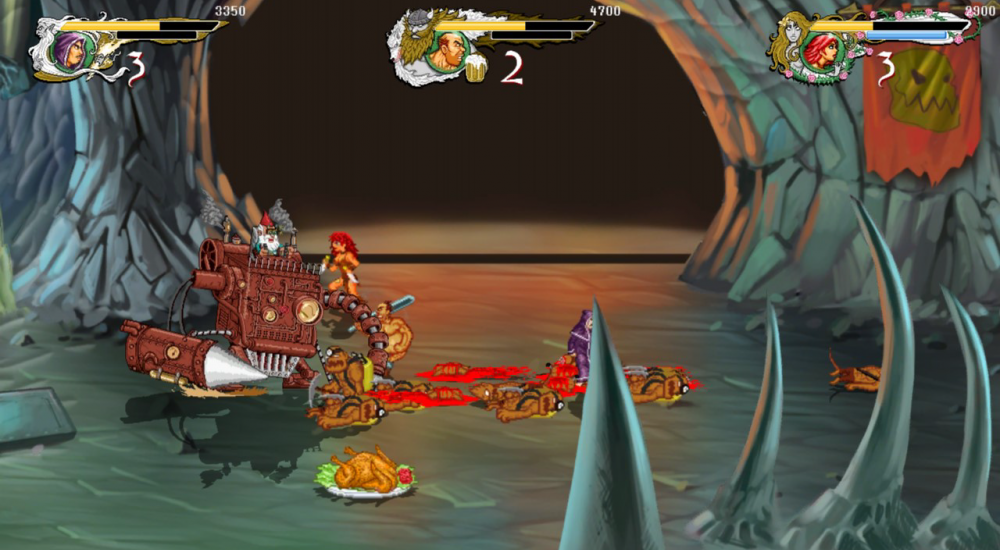 Slap in your Hall & Oates mix tape and grab a can of Jolt Cola; we're going back in time. Let's warp back to the 1980's, where the high fantasy beat-em-up was King, and you couldn't play a single game without running into loinclothed barbarians. Guiding us in our time traveling ventures is the three-player co-op brawler of yesteryear, Dungeons: The Eye of Draconus, out today on Steam.

Billed as a "comedy retro brawler," Dungeons harks back to cherished 80's cartoons like He-Man to provide a wacky romp through the parody of a fantasy world. You'll embrace beat-em-up traditions like mounts (such as the valiant War Slugs, or Flame-Breathing Chickens), three different playable characters, and the hallmark of any quality brawler, gigantic, health-restoring turkey dinners.

You know, Brawlers seem to be making something of a comeback these days. We're seeing a genre returning after a long hiatus, as titles such as Castle Crashers and Dragon's Crown recall those long-past adventures in the arcades, feeding endless quarters into into ravenous machines. I'm glad to not be sinking $34.25 worth of change to get through the fourth level, though.