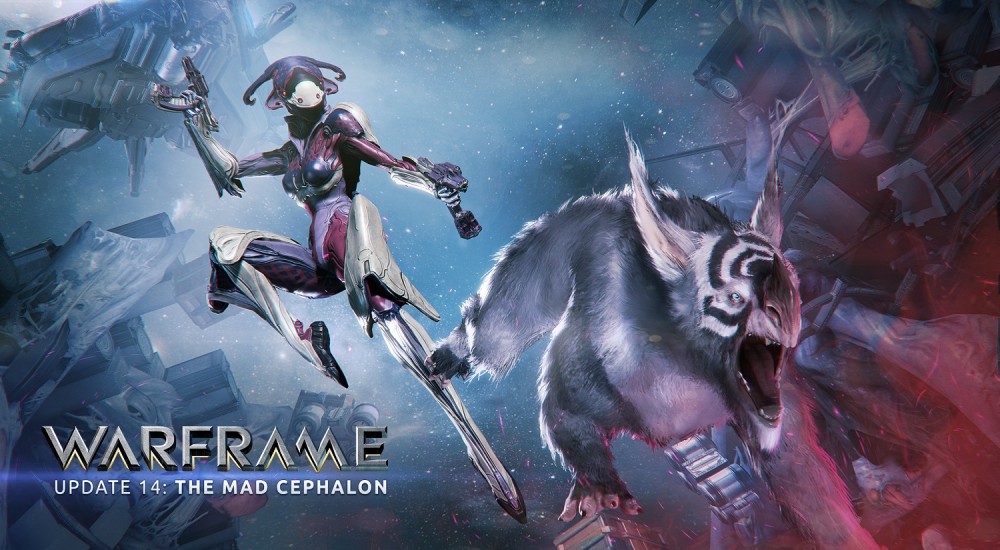 One hefty update has hit Warframe on PS4 just last week. Moreso than any other previous update, Digital Extremes focused on simplifying games' user experience,  as well as increasing the overall immersion of the Warframe universe. If there's any time to get into this Free-to-Play title, it's now.

As Warframe continues to grow in popularity (already up to 10 million downloads on PC and PS4 combined), the devs at Digital Extremes continue to upgrade and evolve the way gamers play the game even in the most unexpected ways. The new title update known as "The Made Cephalon", looks to expand on almost every aspect of the game, from the user interface, to adding new Warframes, weapons, quests, even creating pets! We certainly didn't expect to see something like that, but it seems to be an interesting distraction. “We’re putting the ‘B’ back in Beta with this update,” commented Steve Sinclair, Digtial Extremes' Creative Director. “Seriously though, we need a new word for Beta. It just doesn’t fully encompass the evolutionary process that games like Warframe go through over their lifetime.”

Players have a lot to dig into within Update 14, as you'll see in the behind the scenes video above. While working hard to provide us with a ton of new content, Digital Extremes also looks to be having fun at the same time. Here are the main things they want us look out for in this new update:

NEW PLAYER EXPERIENCE – Immerse yourself into the re-imagined user interface and menus aboard your personal spacecraft, The Liset. A meaningful Quest walks new players through Warframe, providing essential information on gameplay, lore, game modes and menus and introduces players to Ordis, the ship’s Cephalon, a guiding voice on The Liset.

PET COMPANIONS – A new Quest unlocks a Genetic Foundry used for breeding biological specimens on your ship! Breed a Kubrow by collecting a Kubrow egg and incubating it in the Genetic Foundry. Different Kubrow personality types have different combat and non-combat abilities. Make your Kubrow more combat effective by caring for it and equipping powerful link mods. Create genetic imprints of your Kubrow that you can trade with fellow Tenno and combine to create your perfect pet!

NEW WARFRAME – A master of illusion, Mirage confounds the enemy in a spectacle of style and power. MIRAGE's powers include: Hall of Mirrors - Mirage creates an entourage of doppelgangers to distract and confuse the enemy. Sleight of Hand - A natural prankster, Mirage booby-traps nearby objects.  Eclipse - Standing in light, Mirage becomes the main attraction, dealing heavy damage. While the shadows make Mirage difficult to track and even harder to hurt.  Prism - Fires an energy orb that shoots lasers in all directions. Activating again detonates the orb, blinding nearby foes.

DARK SECTORS CONFLICTS – Introducing a new player-versus-player game mode to replace the existing Dark Sectors Solar Rails conflict game mode. Choose which Clan or Alliance you wish to support and play the role of Attacker or Defender on a multi-staged objective mission! Up to four human players per side, with empty player slots auto-filled by Spectres.

NEW WEAPONS  AKZANI – The choice weapons of Mirage, these fast-firing dual pistols deliver a deadly performance. SILVA AND AEGIS – a Sword and Board style weapon created from the concept of the community Melee Design Contest Winner – SilverBones.

The Xbox One version of Warframe will also be hitting LIVE soon, coming this September 2nd.

“Getting endless feedback from our players along with our own ambitions for the game makes us continually work to improve it. Sometimes that means re-working major foundational components to the game like the new-player experience. This entire experience has been a game changer for us -- direct player connection -- tap into it, nurture it, know what to take from it and a game can become more than you ever imagined it to be.”