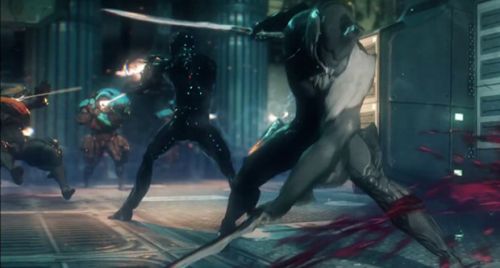 The developer responsible for Darkness 2’s and Bioshock 2’s multiplayer gameplay, Digital Extremes, has announced its next PC title, Warframe, as a free-to play third-person shooter. Just like everyone else, we like free things too, so we got curious.

The enslaved alien race called “Tenno” are now on the brink of destruction by another alien group called the “Grineer”. Having kept the Tenno under their belt for hundreds of centuries, the Tenno’s dwindling numbers has caused them to make one final stand for their survival. In the Tenno’s uprising against the Grineer, they have discovered their last hope in an “ancient exo-skeletal technology only they can operate”, known as Warframes, to combat their enslavers.

So far, we know that this game will be a PvE shooter and support 4 player co-op. Players will battle through randomly generated missions to gain new Warframe upgrades and customize their suits’ powers accordingly.

Warframe is a new name for an old game," states Chief Creative Director, Steve Sinclair, at Digital Extremes, "It was a shelved concept we kept coming back to. High-tech machine-gun ninjas set in a far-future, over-hyphenated, Manga-Dune mash-up. Free-to-play lets us take risks. It allows us to build Warframe with our players. Many upcoming games, such as Hawken, are coming with free online play as game developers have started to see their potential. Digital Extremes CEO, James Schmalz, concurs with this:

We've heard for years now that PC gaming is dead. It isn't dead; it just went underground for a few years and is now re-emerging with this massively growing free-to-play market that has matured to the point where the quality of games we're seeing rivals many AAA retail games.”

In many ways, we're going back to our PC action-based roots. Free-to-play is like shareware 2.0! Once again, we're connected directly to our end-user. They decide whether or not to pay for their experience and we listen to their feedback and continually improve the experience to make it worth paying for. Game development as it should be.

This Autumn, Digital Extremes will be holding a closed beta event. If you’re interesting in participating in this, be sure to head over to their official Warframe site and sign up now (slots will be hard to come by). Regardless if you make the beta or not, you’ll receive a free, pre-launch only weapon for your sign up.

For a close up look at what Warframe will look like, check out its newly released trailer below and see why we are incredibly intrigued to try out this free title ourselves. I mean, really: who wouldn’t support something designed to be free?