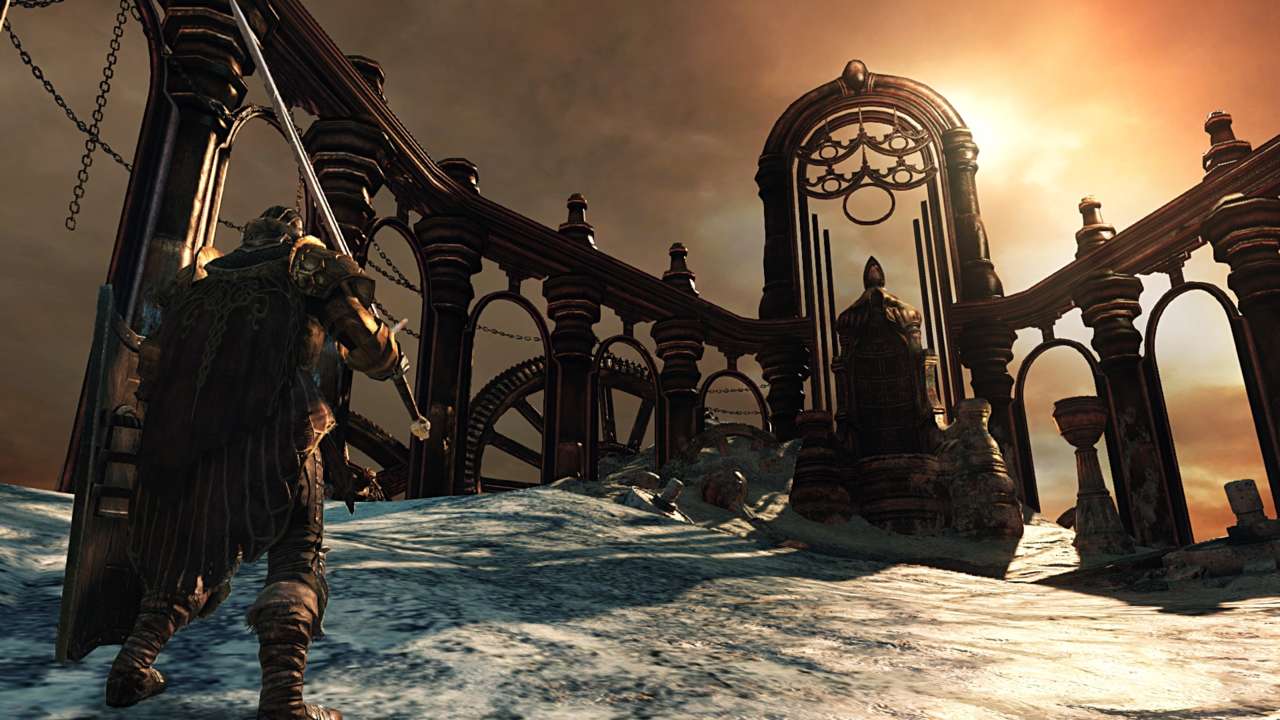 The next Dark Souls 2 DLC has hit and once again FROM Software has delivered a whole new world of pain for everyone in Drangleic. The Crown of the Old Iron King brings players to Brume Tower, a monolithic spire held to the world by giant chains. Like the previous content it is packed with new enemies, fierce bosses, and challenges that live up to the Dark Souls name. I spent hours in Brume Tower with Cassius Clay, a boxer who punches everything he sees and is conveniently sitting around Soul Level 150. The DLC can be accessed immediately following the Old Iron King boss in the Iron Keep. Behind the primal bonfire is a newly opened area accessed by a key that is put in your inventory when the DLC is purchased. Past the door is a shrine similar to the Sunken King shrine which will teleport you to Brume Tower. Sadly, the fight we can't access is one of the best presented bosses in the game, but the whole "boss is just a giant suit of armor" mantra has been done death in the core game, and it takes the bite out of the DLC's finale. And none of them are fit to hold the Tower Knight's shield.

Brume Tower is an intimidating sight when you first gaze upon its splendor. The tower looks as though it is trying to pierce the atmosphere with immense chains tethering it to the earth. Once inside the tower reveals itself as a network of chains, coal, and ashes ready to swallow you whole and spit you out as a hollowed soul. Brume Tower doesn’t have the same block puzzles as the previous DLC of Shulva, but it is a different type of labyrinth in its own right. Levers and gears fill the walls and the fire bellowing on every floor make Brume a furnace of destruction. Much like Shulva and the original Dark Souls there are many shortcuts to discover, adding to the sense of accomplishment when you round back to a familiar area from a different path. The enemies inhabiting Brume Tower are thematic, which really adds to the atmosphere of the area. Ashen knights, immolated archers, and lava demons give the tower an uncanny feeling of desolation. Each floor of the tower holds a new surprise and without spoiling anything, the tower holds some very challenging traps. One enemy in particular has a single role of carrying around a powder keg, and fights become interesting when said kegs come into contact with a stray flame. The tower has a wide variety of areas to battle in ranging from tight spike filled hallways to large mountainous outcrops with no safety railings.

The way I’m describing Brume Tower is intimidating but don’t get me wrong, the level design is excellent and the challenge is on par with the rest of the game. I didn’t get stuck trying to find my way around and exploring the tower is really fun, and I highly suggest bringing some help or finding one of the many NPC phantoms scattered throughout the levels. The verticality of the tower is spot on, and I could almost feel the heat spewing from the furnace as I made my way through the Crown of the Old Iron King. One nitpick I have for this content is the variety in the bosses. Even though two of them are optional, I was expecting a bit more than what they delivered. Without spoiling anything I felt the bosses fit right in with the inferno theme, but were lackluster compared to what I encountered while searching for the Crown of the Sunken King. That being said the cacophony of red phantoms invading throughout the tower partly makes up for the underwhelming boss fights.

The second Dark Souls 2 DLC is different from the Crown of the Sunken King in more than just location. Although it still holds the same challenge fit for a Dark Souls moniker, Brume Tower is much more aggressive. The enemies, the pacing, and the overall tone of this content feels awesome and the rewards are both interesting and exciting. The Crown of the Old Iron King feels more like Dark Souls than most of the sequel, but it isn’t going to turn any fans of the series. If you have finished the game proper you have probably grabbed the seasons pass, but if you are on the fence I encourage you to check out the extra content for Dark Souls 2.