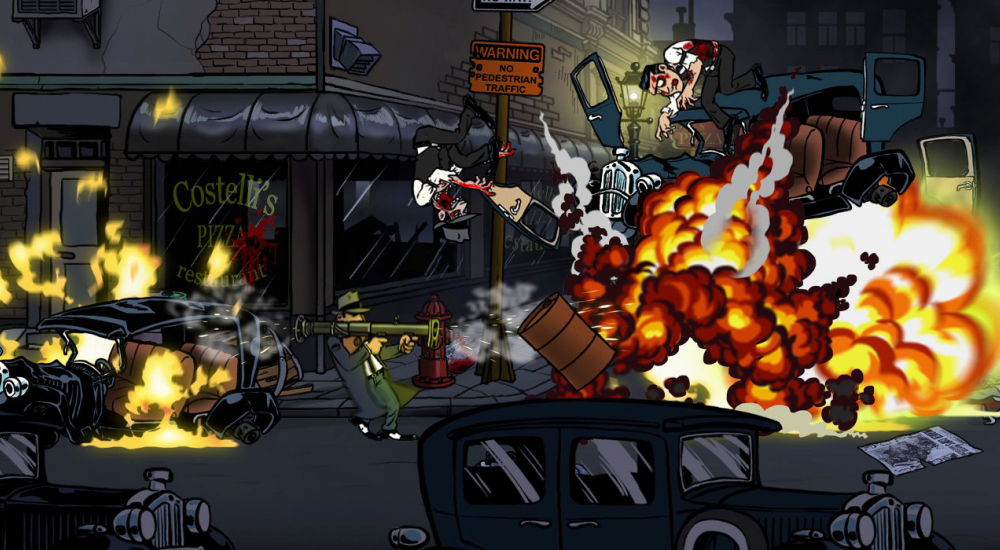 Crazy Monkey Studios isn't afraid to ask the tough questions, like "What if The Godfather was less like a book and movie series and more like Metal Slug?" Enter Guns, Gore & Cannoli, a sidescrolling arcade action game that shoves you back to the roarin' 20s with a truck load of guns and plenty of old fashioned Italian knowhow.

Vinnie Cannoli is a rough gangster from the heart of Thugtown, and he's on the hunt for one of his pals who has gone missing. Talking to the local gangsters usually gets things done, right? Talking, of course, refers to letting loose a few hundred rounds from a Tommy gun before walking through a puddle of the other person's blood.

Guns, Gore & Cannoli works hard to spin an epic gangster story (with zombies, of course) that takes place in an immersive environment. 1920s America was a pretty tough time, what with prohibition and a depression about to hit, and it's one of the most active decades of gangster activity. Not a bad set-up for a wild shooting game, wouldn't you agree? Especially when there's a nice two player local co-op option!

Developer Crazy Monkey Studios plans on releasing Guns, Gore & Cannoli in early 2015 for PC, Mac, Xbox One, PS4 and WiiU. The game was also recently greenlit on Steam. Online co-op most likely won't be a feature, but don't let that keep you from helping Vinnie get his plate of revenge pasta served before it gets too cold.