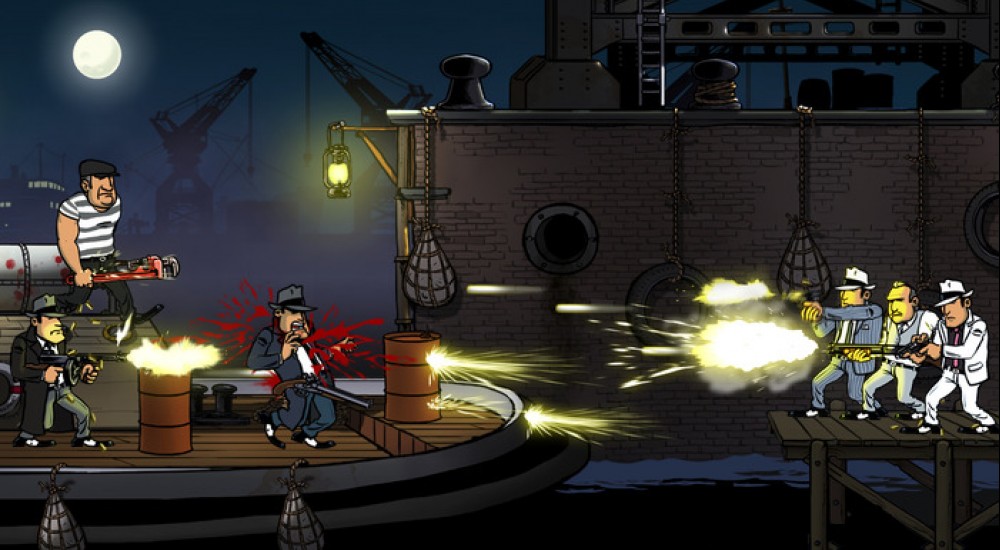 Crazy Monkey Studios and its crazy platform shooter is now a little more in-your-face. A PC demo has been released for Guns, Gore & Cannoli to show off some of the game's atmosphere and basic features. It's just enough to get a taste of that fine cannoli flavor!

To get a good idea of what Guns, Gore & Cannoli is all about, think of a classic sidescrolling arcade shooter like Metal Slug, then replace the plot and characters with a good old fashioned mafia storyline.  The game spins an epic gangster story (with zombies) that takes place in 1920s America, a world locked down by prohibition with a depression looming on the horizon. In other words, organized crime is definitely a thing. Vinnie Cannoli is a gangster from Thugtown out on a rampage to find one of his pals who's gone missing. Instead of having civil discourse over a plate of actual cannoli, Vinnie is more interested in using Tommy guns to get things done. Can't fault the guy for wanting to be efficient.

The demo features one level and one boss, but since that level is in a stripclub, we think it's enough to satisfy. Both Mac and Windows versions are available. The game has been greenlit and recently launched a Kickstarter program to help push it into reality.

Guns, Gore & Cannoli is heading for PC, Mac, Xbox One, PS4 and WiiU in early 2015 with support for two player local co-op. Online co-op most likely won't be a feature, but don't let that keep you from helping Vinnie get his plate of revenge pasta served before it gets too cold.