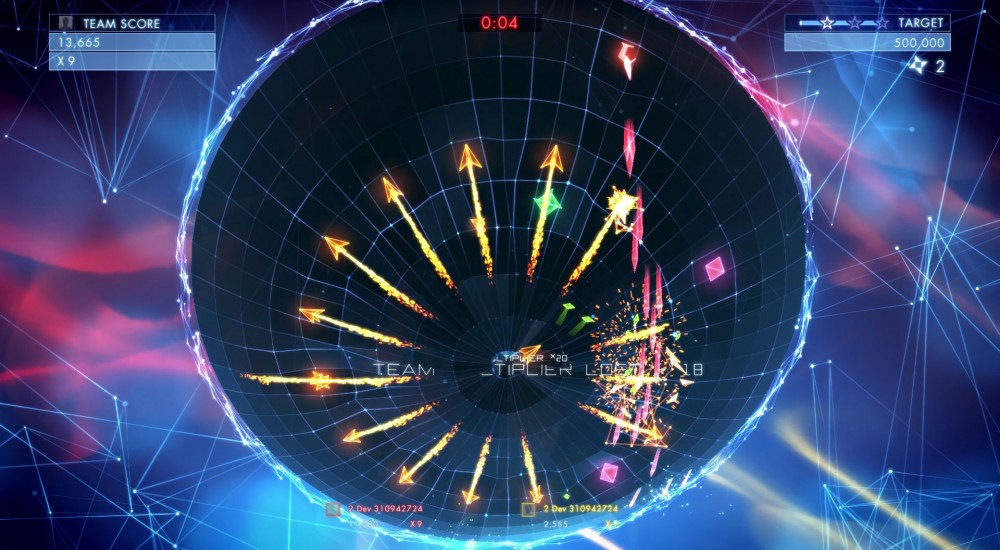 The fast-paced, hectic gameplay of Geometry Wars 3: Dimensions, besides its new 3D environments, should make any longtime fan of the Geometry Wars series excited to try the game out. Why not bring a friend along for the ride too? There will be the return of multiple game modes in Geometry Wars 3, including an online competitive multiplayer mode and a whole bunch of 4-player local co-op modes.

Just like in the new Adventure Mode, co-op gameplay will have players moving through 10 levels with a number of environment types, game types, and challenges. Each will include their own unique battle mode, with some classic game types like King or Pacifism, and a assortment of new ones such as Infection. These game types can be mastered in Adventure Mode, but it's in co-op mode that true strategy and new dynamics can be found. Optimized for 2 or more players, these stages will be expanded for a wider view of the maps, but will increase the number of enemies spawning on-screen. Whether or not you and your team works as a close unit or separates to conquer up to your ultimate strategy. King Mode, as an example, features safe zones that randomly spawn on the map. These areas are the only locations where players are able to rain fire down upon the geometric enemies spawning all around them. Though they do provide protection against the onslaught, they do not last for a long period of time once utilized. This is where players must be strategic in choosing when to enter these zones, or else be left to survive without them. Another example is found in the Claustrophobia game type, where players must survive in increasingly shrinking maps and space to avoid enemies.

Geometry Wars 3: Dimensions will be arriving this November 25th on PS3, PS4, and PC, while the Xbox 360 and Xbox One versions will be out on November 26th.