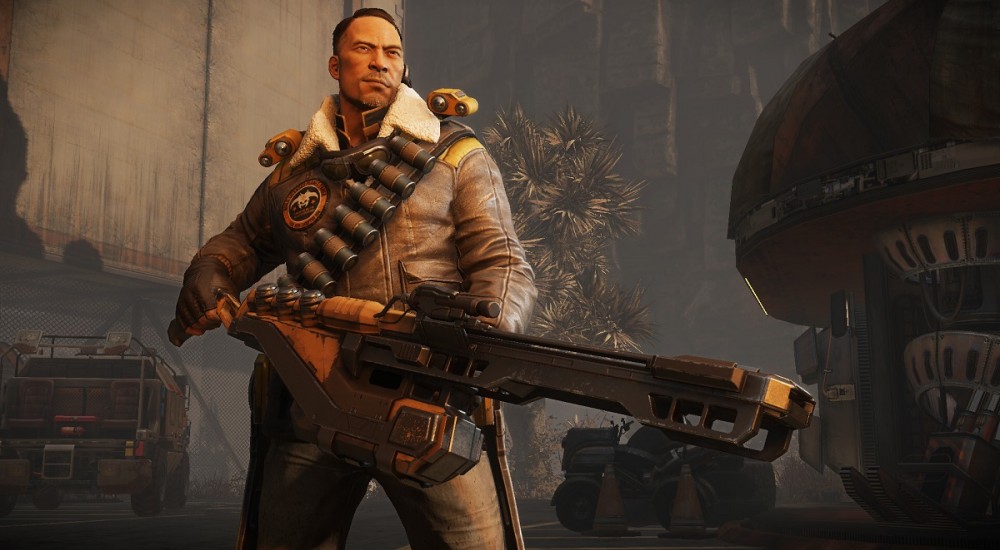 Turtle Rock Studios recently announced the first of the remaining Evolve Hunters to be revealed: Cabot, the Leader! What sort of abilities will this character possess to help trap and kill the Monster?

Cabot is the third and final Support-class Hunter, with many abilities that both assist the team and put the Monster in very dangerous positions, both up close and at a distance. While Hank has his shield gun to protect his teammates and Bucket can use his detachable drone-like head to prevent the Monster from sneaking away, Cabot's main ability is to increase the damage output of all his teammates by weakening the Monster's defenses. His abilities include:

Cabot’s signature weapon locks on to its target, weakening its armor and its hide. All damage done to his target is doubled. With the Damage Amp and Hyde’s flamethrower or, even better, Markov’s Arc Mines (with, say, the reload perk,holy crap) the monster is going to die. The Damage Amp, however, uses ammo. So reload often.

On his command, his ship—the Laurie-Anne—drops an air burst of radioactive dust, highlighting every living thing in a 60-meter radius for twenty seconds. If the monster is in the dust’s area, not only is it unlikely to escape, it’s unlikely to live. Thanks to…

All support hunters have powerful weapons, Cabot’s is the only one that can shoot through solid rock. If he can see its outline, he can kill it. With clear line of sight, the Rail Cannon’s rounds can keep going. If line of sight is blocked, by trees, or buildings, or rock, or anything, the cannon’s projectile bursts into a cone 40 meters long. Anything in that cone takes half damage from the Rail Cannon. Using all of these abilities in conjunction with one another, the Monster literally has no place to hide. Using Dust Tagging to locate exactly where it is on the map, while firing through solid terrain with the Rail Cannon from a distance, the Monster will continually take chip damage and may be forced to fight the Hunters head-on. However, with the Damage Amplifier being a fantastic co-op support weapon, the Monster may not have a choice! To see Cabot in action, check out the 10 min video featuring his gameplay:

More video footage of Cabot and the game will also be streaming live this Friday at 3 PM PT, if interested. Additionally, Turtle Rock will continue to reveal the other remaining Hunters, four new maps, and game mode all this month.

Evolve releases this February 10th on PS4, Xbox One, and PC.