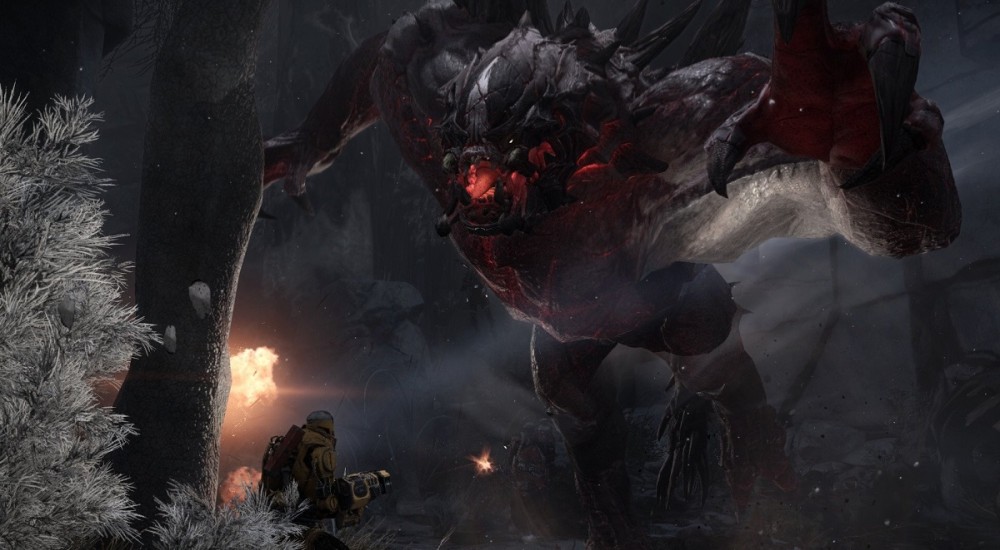 A new Evolve trailer was released a couple of days ago that revealed some extra tidbits on the game's plot, as well as small visuals on the next two Monsters to be announced. What sort of Monsters can players expect to play as in the future? Big ones.

First off, we learn that the alien planet has been overrun by these Monsters that have begun attacking human colonies for an unknown reason. Instead of trying to contain these creatures with brute force, the Hunters were hired to help the colony in evacuating the planet. Being the best of the best at what they do, they arrive to neutralize the ever growing Monsters around the vicinity.

In addition to some back story, we get a few very short peeks at two new Monsters yet to be revealed by developer Turtle Rock Studios. Around the 1:54 marker, a Monster with a quick slashing attack appears to strike one of the Hunters, but it's hard to make out exactly what it looks like. Clearly, however, it's neither the Goliath or Kraken. Known only as the "Wraith" (as indicated by a Twitter post)  for the time being, it seems to have more stealth capabilities that the other Monsters and can teleport around the map. Additionally, at the very end of the trailer, we have the currently named Behemoth. This Monster received its name from the "NameThatMonster" contest that the community could vote in order to name it. With a face much like the Goliath's, we wonder what special abilities or attributes this alien creature will possess. Evolve hits this coming February 10th, and preordering nets you a special Goliath skin with an additional playable Monster. As a side note, all future Hunters will need to be purchased separately, but downloading the free DLC maps (fortunately) won't be required to play online with other players with them.