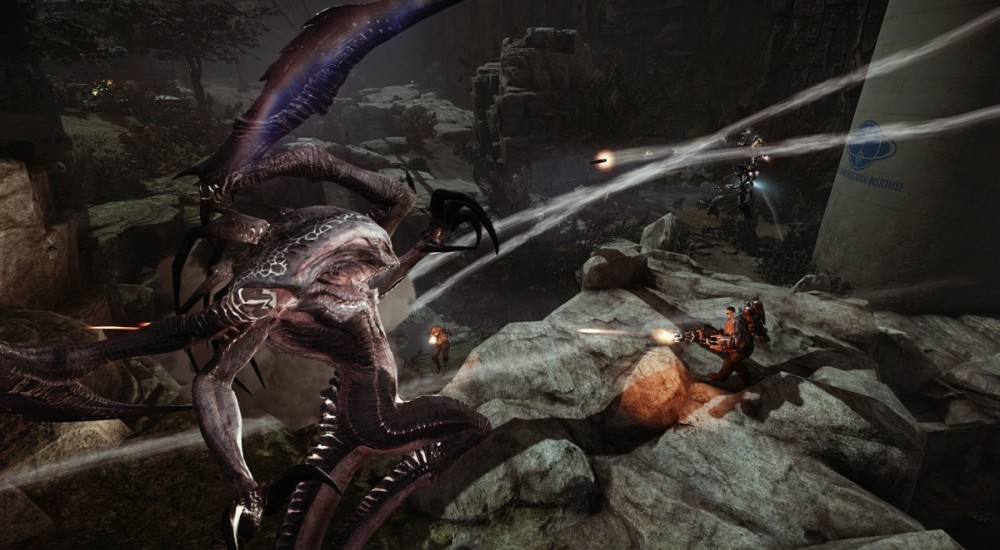 Remember that small glimpse we got of the two new Evolve Monsters that were yet to be revealed via trailer footage? Well, we now have some insight on one of them, officially confirmed as the Wraith, along with additional information on the upcoming Open Beta and Offline Mode!

As the third playable Monster that will be offered in Evolve, this Monster battles unlike any of the other monsters we’ve seen before. For one, the Wraith is much smaller than the other three and much, much faster. It may not look as intimidating at first glance, but it’s abilities that Hunters will fear going up against. To make up for its size and strength, the Wraith uses stealth and hit-and-run tactics to get the jump on the Hunters. Its abilities include:

From the trailer, the Wraith seems to be one speedy devil, but probably doesn’t have the durability of the Goliath or even the Behemoth. But, if you try to play the Wraith like Nightcrawler from the first scene of X2: X-men United, you should kick a ton of Hunter tail. More strats on how to use or combat the Wraith can be found here. Almost an hour long video of Wraith gameplay footage is provided below too. Enjoy!

Also, Turtle Rock revealed that playing online is only one of the ways to experience the game. Say you don’t have any of your friends online to play a round or so, or you just want to get some practice in without being destroyed by online opponents. Look no further than the Offline Mode! Play with or against AI-controlled opponents to improve your game, just don’t take them to be lightweights (are supposedly play harder than you’d think). Furthermore, a quick press of a D-pad button switches your control over Hunters, so feel free to explore multiple characters to see which ones work the best for you!

Evolve arrives in retail this coming February 10th, but Xbox One players will have their chance to try the Open Beta this January 15th-19th. Evolve’s campaign mode that we discussed previously, Evacuation, will be open for testing, specifically the core game mode “Hunt”. Additionally, new Monsters and Characters can be unlocked during the Beta that can be transferred to a save file post release.