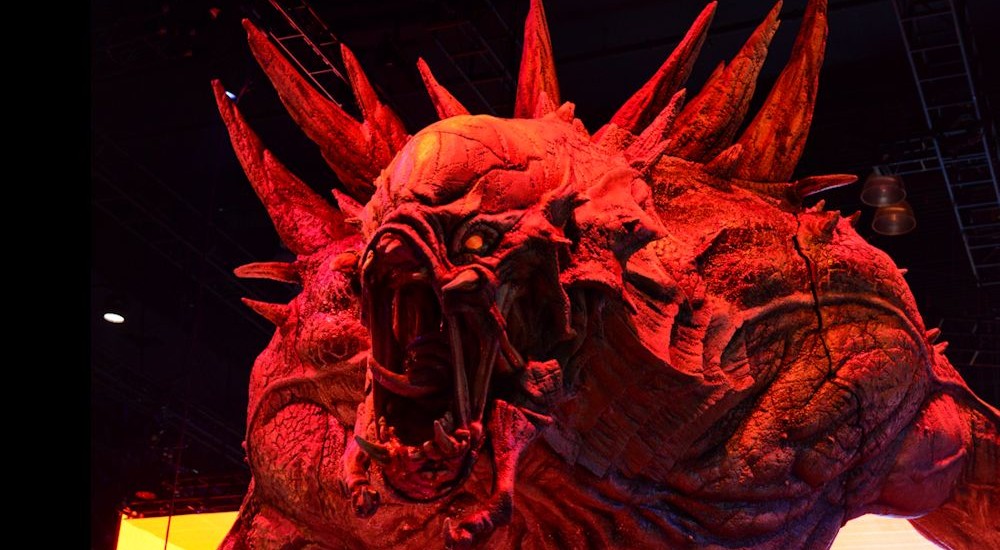 Let's face it, Left 4 Dead gave us an explosion of co-op games after it's success. Turtle Rock Studios' title was one that showed us you didn't have to necessarily compete to have a replayable multiplayer game. Their next outing is a hybrid multiplayer game, and while there's some competitive elements present, they aren't necessary. Evolve is all about 4vs1 and while that might seem like the sides are unbalanced, the reality is the matches are much more closer than you'd think.

Evolve pits four players against one giant monster. While Tally brought us impressions of the first monster, The Goliath, from PAX East; E3 2014 showed us a new monster called The Kraken. The Kraken offers some new choices for gameplay; for one it's able to fly and/or levitate which can really change the dynamics of combat. The four hunters need to take this into consideration when choosing how they'll equip themselves for battle. For instance the trapper might be better served to be Maggie who has harpoon traps that tether the monster to the ground.

The hunters are divided into four classes; trapper, assault, medic and support. Each one plays a crucial role in keeping their team alive and bringing the monster's health and armor down. While the monster must hunt down and eat the small animals that roam the level, the hunters must also contend with these creatures with a greater risk versus reward. From the monster's perspective it starts out fairly weak, but can evolve quickly by eating a few dozen creatures. Once ready, you find a safe spot within the map, evolve for a few seconds and level up your skills. Rinse and repeat for three stages of evolution.

I played my round as the monster, which actually gave me a good handle on what a co-op team needs to do to handle the enemy - whether that enemy is AI controlled or player controlled. The monster gets a short head start and I immediately hit the buffet of creatures to get my first evolution out of the way. The hunter was able to locate me rather quickly thanks to his ability to see my "footprints" on the map.

Luckily the monster has some abilities of his own - you can "sniff" a certain radius allowing you to see creatures and players if they are closing in. It's at times like this I decided whether to pick off a single player or run for the mountains and continue trying to level up.

The Kraken's flying ability came in handy quite a few times, the biggest boost while flying is the disorienting nature for hunters and the ability to shoot small energy balls at the players. Combined with my lightning smash it was easy to scatter and confuse the players and really that's the major tactical goal for the monster. Isolate and confuse.  Unless I was actively harpooned to the ground I was able to use hit and run style tactics on the players and then disappear into the jungle.

One thing became clear after several small skirmishes with the players - the medic is the key to a good co-op team. As Lazarus they can instantly revive a downed teammate, basically nullifying the monsters kills.

The battle raged on and eventually I evolved to the final stage of the monster. I put all of my points in these energy ball traps and a few into a wind attack that knocks the hunters back. Now that I was a huge beast it was time to take down the player's generator to win the match. Once there I begun my attack, but was quickly stunned by the players swarming in. My hit and run tactics could no longer work - it was either kill the opposing team and/or the generator or be killed. It was absolute chaos...and the spectators were cheering on watching the match. Several times I focused on the medic, only to be stymied by the assault or support classes making my movements slow and difficult. I was continuously tethered to the ground by the trapper. I struggled as I knocked the lines free from my body, thrashing out with every attack button I could. Bodies were flying everywhere, the generator took periodic damage when I could get a hit in. One by one the players fell until only the assault class remained. My lightning slam made quick work of him. I had a sliver of health.

I wailed on the generator...the players were respawning. I could hear the other team counting down until the drop ship was ready with reinforcements. 3...2...

Generator destroyed and the match was won. My hands were shaking, the crowd around was buzzing. A Turtle Rock rep told me that they were surprised just how well the game works as a "spectator sport" - which is why it was set up as such at E3 2014.

It's OK if you don't want to take on another player the AI will assume the role of the monster for you and you can feel that same rush. I absolutely loved every second I played of the game, Evolve is likely to be a hit and a staple in most gamers fall gaming diet.

Evolve is out October 21st for the PC, Xbox One and PlayStation 4. It supports four player online co-op. We'll have a video interview up shortly with one of the developers diving deeper into the design.