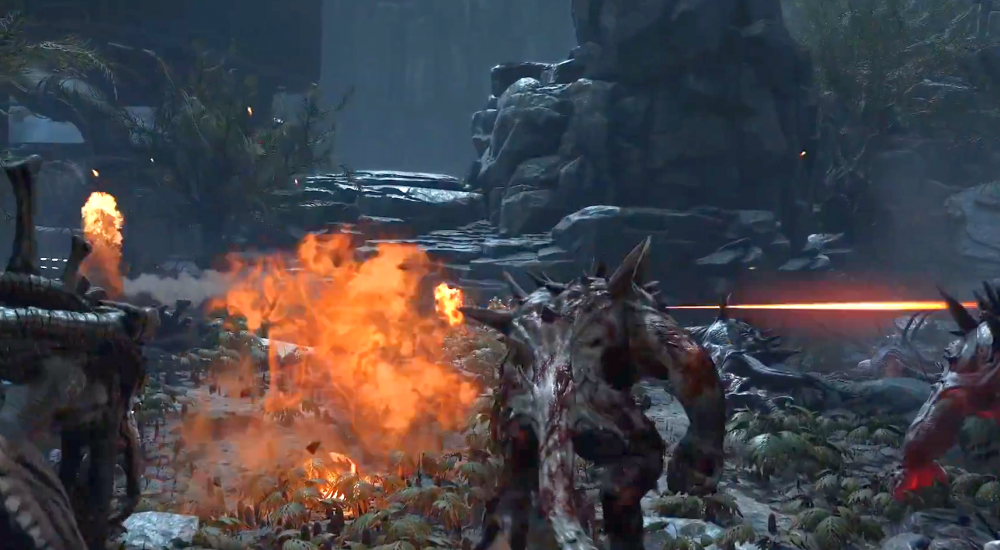 We have a little bit more insight on a special mode found within Evolve, called "Evacuation"! Take the experience of Evolve and turn it into a five-round match with new variables introduced each game.

For those of you that missed the trailer last week, "Evacuation" is a special gametype that has a combination of modes, maps, and campaign elements. With over 800,000 possible ways, or "paths" to take within the mode, there's little chance that any game will be played out the exact same way twice. While this mode isn't exactly a story campaign, it does try to tell a narrative over the five days the Hunters experience together. The main objective of the mode is to defeat Monsters over a period of 5 rounds. If the Hunters don't succeed, the planet (known as Shear) will be lost to the evolving creatures.

There are a ton of trailers that explain the five rounds and tutorials that walk us through them a bit better. First, let's look at the first round, "Hunt Mode":

After the first round ends, the players then choose the next location and game mode through a vote. The location of the first map is always random, but the second map will always be of two territories that adjoin together. The two modes to choose from are (other than Hunt) are either "Nest" or "Rescue".

Rescue Mode pits Hunters to locate injured colonists scattered around the map. While the Hunters  must protect these colonists and escort them back to a rescue shuttle, the Monster is working to devour as many as possible. Whichever side rescues or kills the majority of the colonists is declared the winner of the round.

Nest Mode, however, reverses roles a bit and has the Monster trying to locate six Monster eggs hidden around the environment to hatch them into Stage 1 Goliaths. The Hunters are tasked with locating these eggs first and destroy them before the Monster does. Two ways Hunters win include: Destroy all eggs and spawned Goliaths OR kill the main Monster.

From rounds two through four, players vote on which of these three modes they want to play, with the fifth round always being "Defend Mode". In this mode, the Hunters are trying to fuel an evacuation ship to escape the planet. Surrounded by defensive walls powered by their own generators, the Monster must try to break through to destroy the ship using waves of Goliath minions under his control. Hunters need only to refuel the ship OR kill the Monster to win the entire Evacuation game.

Now, you might think that you only need to win the fifth round to win the game, and you're right. However, the game awards winning side of each individual round a slight advantage going into the proceeding round, either by changing the environment in subtle ways or tweaking the stats of things in the game. An example: the Monster won last round, so next round his minions will be slightly boosted in strength from the time they spawn. This is what developer Turtle Rock meant when there are hundreds of thousands of ways to experience Evacuation each time one plays. The image below shows another example of how a game can play out in Evolve: Evolve arrives this February 10th, but Xbox One players can gain access to the Open Beta (and play Evacuation) this coming January. For a more in-depth look at Evacuation Mode, check out a past livestream featuring it below: