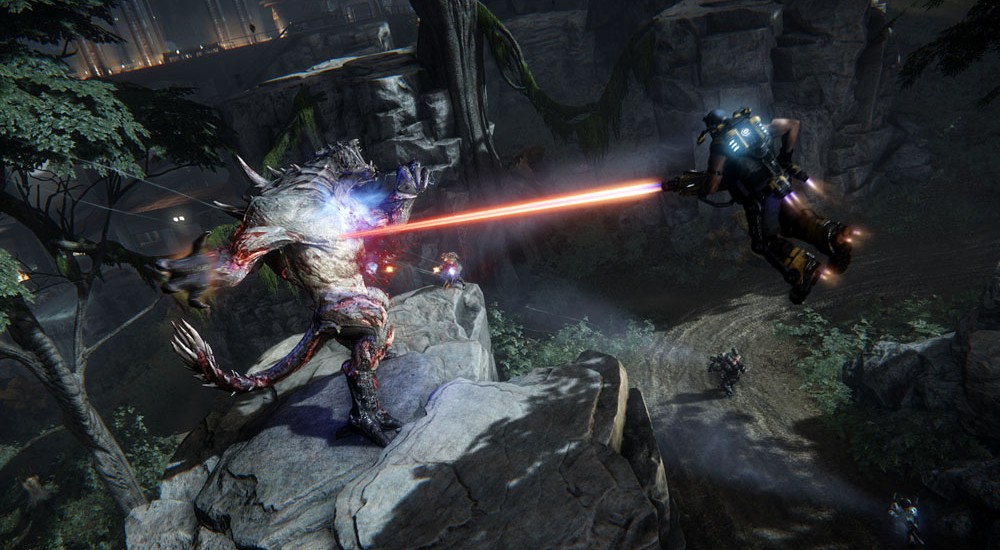 My other appointment with 2K Games this year at PAX East 2014 was for Evolve, an upcoming squad-based game by Turtle Rock Studios, makers of Left 4 Dead. The game pits four Hunter players against one boss Monster player or AI (as a dev confirmed for us via Twitter). I went hands-on with the game and had a pretty good time. Let’s find out why.

Starting with the basics, Evolve has four Hunter characters/classes: Medic, Support, Assault, and Trapper. These classes all handle uniquely with their own special weapons and tools. The medic can heal others, the support can shield others, the trapper can tether and contain the Monster, and the Assault can bring some massive pain. All of the non-Assault classes can do damage as well, just not as efficiently as the Assault. During my play session, I was selected to play the Support and was teamed up with three other Hunters against a Monster player. While my experience was in the competitive 4v1 scenario, many of my observations should still be applicable to a co-op experience. The Monster we were put up against was the Goliath (on Evolve’s release, there will be different Monster classes to pick from). The Goliath is a pretty sizable brute, and has more than a parting semblance to the Tank from Left 4 Dead. He can throw rocks, combo with powerful blows, and breathe fire on the Hunters. This time around though there are no molotovs or safehouses to run to. Both sides’ objective is to kill the other side, and the map is quite sizable. The Monster wants to alternate between fighting the Hunters and running off to attend to his own agenda: eating the other monsters on the map and evolving (leveling up). The Hunters are, well, hunting the Monster and trying to contain him and kill him before he gets too strong to deal with.

At the beginning of our session, the Monster proved canny and we spent quite some time running around looking for him. As a Support, I stuck behind our Trapper while we searched for the Monster. As we got to areas where the Monster had been recently, we found highlighted tracks on the ground. When the Monster startled animals in the distance, we received notifications as well as pings where the disturbance had occurred. It gave a pretty decent simulation of tracking an animal through the wilderness. The map was full of lush jungle terrain as well as cliffs that we had to jet pack up to. Sometimes we were beset by smaller, AI-controlled monsters that slowed us down. When we finally found the monster, he had already evolved to Level 2. The Goliath was now ready to fight us. The Trapper and I danced around with the Goliath a bit, putting on very small amounts of damage while we waited for our Medic and Assault to catch up to us. This gave us time to get a handle on our skills and guns, all while under pressure to not die to the Monster 2v1. On the offensive side of things, the Support (named Hank) has a laser/beam gun. Throughout our gameplay I brought this out from time to time when my teammates didn’t need much support. Hank also has an orbital barrage ability that has a fairly long cooldown as well as a charge up cast. I comboed this ability with our Trapper’s tether ability several times to devastating effect. His tether would keep the Goliath in one spot while I called the barrage in. It was a little tricky to pull of the timing exactly right, and we missed a couple of times, but it was glorious to behold when it worked.

On the defensive side, the Support has a shield gun which works quite similarly to the medic’s gun from TF2. It’s targeted at an ally and a blue shield absorbs some damage. The Medic’s gun seemed to be the same, except her’s restores health. And then there was my favorite support ability: the area stealth. Again, this ability had a fairly long cooldown, but when I hit it, it deployed a small stealth area around me which immediately cloaked me and any Hunter that remained in it for a short period of time. A huge lifesaver.

Our Trapper also had a “mobile arena” ability that put down a large shielded dome so the Monster could not escape. It was pretty tricky to land when the Monster was running away, but I could see that it was a great asset to Hunter strategy. I didn’t get a great handle on the abilities of the Assault and Medic, but I’m sure they were just as useful, and most likely group-oriented.

Our battle with the Goliath was pretty lengthy and epic, with our Medic getting KO'ed in the middle of the fight. She respawned, but it was a long respawn time to make things fair for the Monster player. I believe it was something like three minutes. Those were some pretty intense minutes as the Goliath knocked some people down to incapacitated status. I remember one time I got to another Hunter in just the nick of time before he bled out. WIth the Medic down, the Goliath had finally had enough of my shielding shenanigans, targeted me and was able to kill me just as our Medic was air dropping back in. By then, though, he was down to a mere 10% of life. I was happy to take one for the team and spectated the other three take the Monster down.

All in all, it was a pretty thrilling experience, and I look forward to seeing more from the game in the future. Though the AI probably won’t be an identical experience to a Monster being controlled by the AI, I certainly hope it will prove similarly challenging.

Evolve will be released Q3 2014 with 4-player online co-op (splitscreen will not be supported) on the PC, Xbox One, and PS4. Up to four Hunters will be able to team up against an AI-controlled Monster.