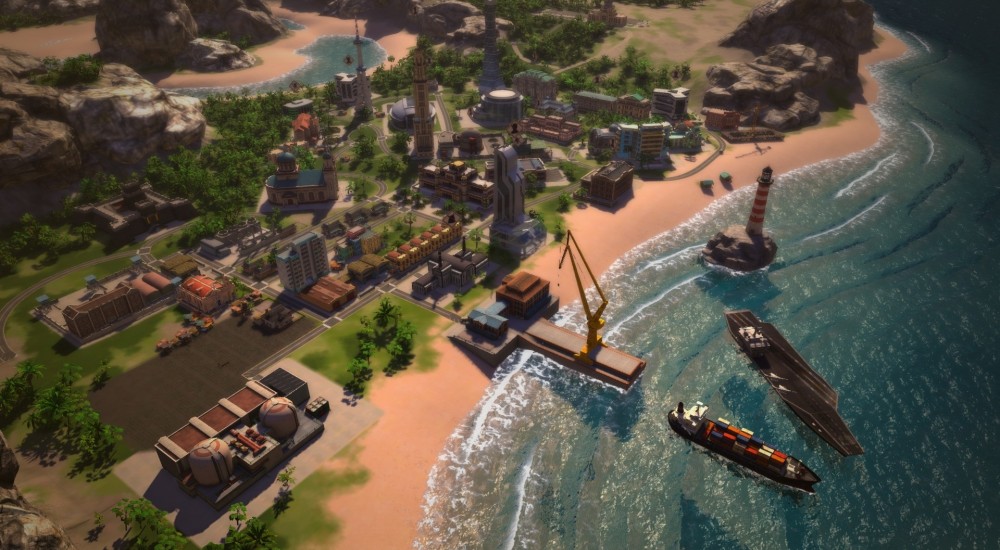 Have you ever sipped a mojito in your coastal mansion whilst being fanned by fifteen hand-picked peasants, stared out into the ocean, and thought to yourself, "My kingdom... It is beautiful and vast. And yet... I desire more. I yearn for an aquatic dominion."  Well then, does Tropico 5 have the expansion for you.

Waterborne, the Tropico 5 expansion releasing on December 17th, will allow you and three like-minded dictators to extend past the previously impenetrable coastline that surrounds your island.  Like a child first learning to swim, your citizens will no doubt need time to acclimate themselves to their new front yard, and what better way to prepare them than by creating a floating apartment building and forcing a few lucky folks to spend the rest of their years on a dubiously constructed barge!  Involuntary living situations aren't the only way for a leader such as yourself to display his dominance over this new frontier, though.  Your farmers, who previously found themselves sequestered to growing fruit, vegetables, and the dreams of the everyman, are now able to harvest the ocean's bounty through kelp and oyster farms.

Along with a number of new production options ranging from buildings to military units to sick water-themed avatar accessories, dictators will find themselves with a new campaign consisting of six missions and four new island maps.  All of this new content will be available for $19.99 on PC through Steam or Kalypso's own client.  If you're interested in our thoughts on the game, check out the review right here.

Incidentally, if the first paragraph does apply to you, may I offer my services as a professional biographer?  My talents include writing mildly funny jokes, congressman level brown-nosing, and a knack for conveniently forgetting embarrassing events such as riots or coup attempts.