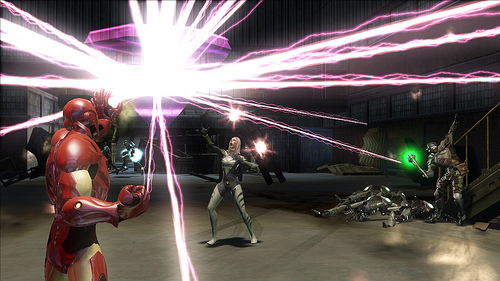 Just when Marvel: Ultimate Alliance 2 started to fade out of mainstream press, Songbird makes a curtain call that reminds us that Ultimate Alliance is still here, and working harder than ever to bring us a beautiful co-op experience.  Visually, we've seen a lot of Hero screenshots.  But, this time, some of the art developers come out to play, and share a little bit about this little birdie.

True to it's comic book origins, much of the concept ideas for how the powers should look in game came directly from comic books.  Referenced from the Thunderbolts from Civil War, pink sonic splashes and sound created objects complete the Songbird character.  Work with a friend to combine her sonic powers with any of the other Marvel Ultimate Alliance characters to create a splash of sound and color, like any great orchestra.  Marvel shares some images of her powers on the screen, including this impressive image of her sound wave wings.

The entire process of developing the finished look for the wings ended up taking about three weeks total. This was a relatively large investment for a single effect, but we were completely satisfied with the result, and developing her wings gave us the know-how to create the rest of her visual effects, as well as many others in the game.