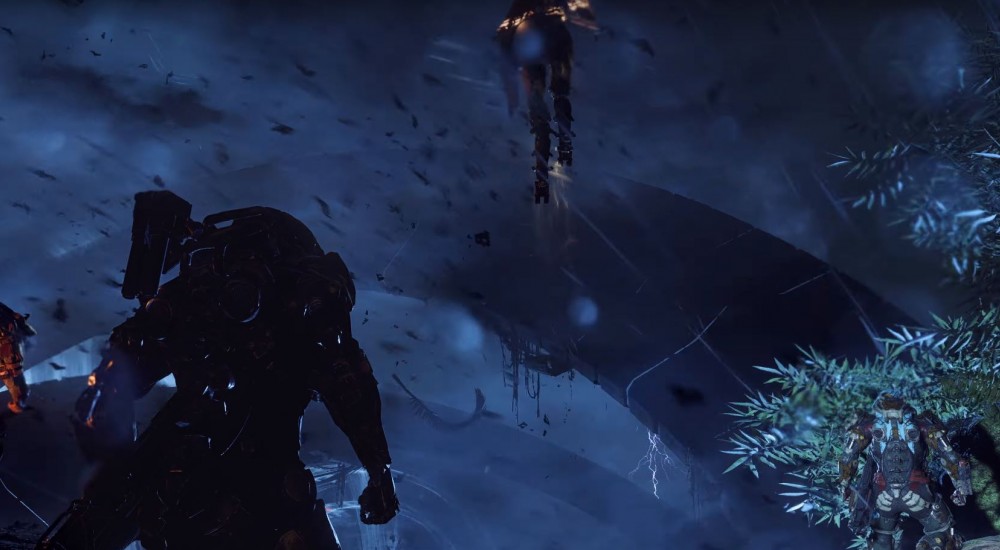 In what feels like the usual fashion these days, the new Bioware IP was teased at yesterday's EA press conference with the promise of more being shown at this afternoon's Microsoft event. In the midst of all that talk about teraflops and the Xbox One X, Anthem was given its time to shine and we're liking what we are seeing so far.

While there are some similarities in the overall action RPG/loot shooter idea that one could draw between Anthem and Bungie's Destiny, the few minutes of gameplay that was shown also had some Mass Effect vibes to it in the way the combat plays out and the overall player mobility (players have jet packs and can boost run). Players will don exosuits - called Javelins - that come in a few different class types, each of which can be customized with abilities and gear of varying degrees of rarity. The "balanced" Ranger and "heavy-hitter" Colossus are specifically mentioned and shown off in the footage, but we also catch a glimpse of another exosuit that seems to be a little more "magical" (for lack of a better descriptor) towards the end. In combat, players appear to have three abilities that are mapped to the bumper buttons in addition to their guns.

The other big appeal here is the open world in which players can run about. While Destiny had the patrol zones that allowed for some freedom, most of the action was confined to the missions. Anthem appears to be more like an MMO in regards to the freedom it gives players to go anywhere. There are also random world events, like the big Shaper Storm seen towards the end, that will pop up as you explore.

From a co-op perspective, the few key things we saw in that footage were:

The game itself looks really good and I'm interested in hearing more about it in the days/weeks to come. While the game was shown during Microsoft's event, there was no mention of it being an Xbox One exclusive title so it seems likely it'll find its way to the PC and PlayStation 4 when it arrives sometime in Spring 2018.