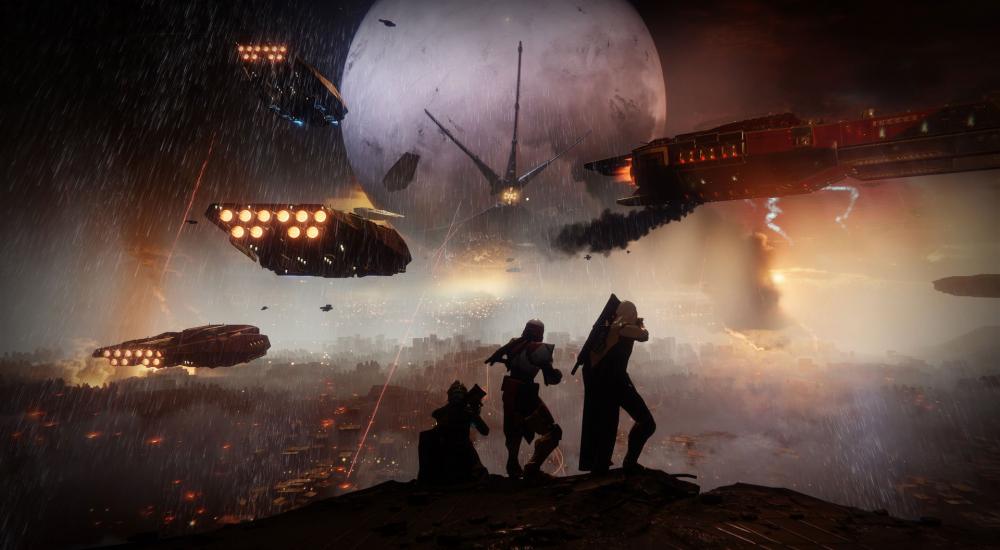 Bungie's next big loot-shooter, Destiny 2, has finally arrived on the PlayStation 4 and Xbox One. If this is your first time playing a Destiny game, you might have some questions about what all you can do with your friends; fortunately, we've got a Co-Op FAQ.

What modes of co-op, i.e., local, LAN/system link, online, are supported by Destiny 2?

How many players can play Destiny 2 online?

Destiny 2 supports up to three players online in a standard Fireteam for all story missions, Patrol zones, and Strikes. The Raid supports up to a total of six players.

Is a PSN Plus or Xbox Live Gold subscription required to play online? How do you begin a co-op session in Destiny 2?

After clearing the first few missions, you'll arrive at a social space called "The Farm." Once you're here, you'll see a message informing you that you can form a Fireteam and enjoy some jolly cooperation. In order to create a Fireteam and invite your friends to play, you'll need to open the "Director" and go to the "Roster" section. From there, you'll see a list of all your friends that are currently playing and can send them an invite to play. Alternatively, from this same screen/list, you can choose to join your friend's Fireteam and hop into their game. Can I join a game if the host is further along than me in Destiny 2?

You can always join a friend to create a Fireteam, but you cannot join a host's mission if they are further along in the story than you. Each of the four planets that are available to explore are, essentially, "unlocked" by completing certain story missions. If you have not unlocked a particular planet by completing the appropriate mission, you cannot participate in any activities on that planet until you do. The host will receive a message informing them that members of the Fireteam are unable to join a particular activity. That being said, friends who are further along in the story than you can always join you and repeat those missions with you. How does save game progress work for co-op play in Destiny 2? Is loot instanced or free-for-all?

All progress is saved individually to each player's character. You are allowed up to a max of three characters on your account. All Engrams that drop are instanced to a player and you cannot share weapons or armor with other players.

For each character you create, some things are shared. Any Exotic gear you unlock is available to all characters (though you may have to buy it again if you currently have it equipped on a different character), the Vault and any gear stored within is shared among all characters, and all consumable items/mods/shaders as well as Glimmer (in-game currency), Legendary Shards, Dust, and Silver (premium currency) is shared.

What co-op activities are there to do in Destiny 2?

For now, the co-op activities you can do include:

What does the Destiny 2 season pass get you?

The Season Pass will automatically grant you access to the first two expansions when they are released over the course of the next year. The first expansion, "Curse of Osiris," has been revealed at this point, but nothing's known about the second expansion for now. Any expansions released in the future will need to be purchased separately.

What are Clans? Do they do anything cool? Does Co-Optimus have one?!

Per Bungie: "Clans are communities that can be accessed in-game and on Bungie.net that are created and managed by players. Clans provide many features that allow the community of players within the Clan to play and progress together, communicate, manage, and build their community."

While part of a clan completing certain activities, such as completing Public Events, Strikes, Adventures, Raids, Patrol missions, and Crucible matches, earns you Clan XP. Each member of a Clan has an individual amount of XP they can contribute each week (5,000 per character) to earn a reward, and Clan Perks can be unlocked by reaching certain XP goals. These perks include benefits like increased Engram drops from certain enemies or receiving more character experience. Once you're part of a Clan, you'll need to visit Hawthorne in a Social Space to pick up your Clan Banner so you can receive any perks the Clan has unlocked. Co-Optimus does have a clan! We aim to be an inclusive, family-friendly gaming website that's focused on cooperative gaming, and those same ideas are at the core of our Clan. We are not a "hardcore PvP/raiding git gud scrub or GTFO" Clan. If you enjoy playing Destiny 2 and just want some friendly folks with which to play, then we may be right for you! You can apply here. We accept members on every platform, though at the moment, the bulk of us are on the PlayStation 4.

What is the new Guided Game feature?

Guided Games is currently in Beta testing within Destiny 2. The idea around this feature is that Clans help out solo players that are seeking to do endgame activities, like the Nightfall Strike or Raid. Members of a Clan that need a one more player to do the Nightfall, or a few more to do the Raid, can enter a Guided Game session and will be matched up with a player (or players) that queued up solo. Presumably, the Clan has experience with the ins-and-outs of the activity and act as guides to the solo player to get them through it. There will be a rating system for Clans within this feature so players will know if certain Clans are more helpful than others.

If you have any other co-op related questions, leave them in the comments below and we'll do our best to answer! Depending on the question, we may add it to the FAQ, too.