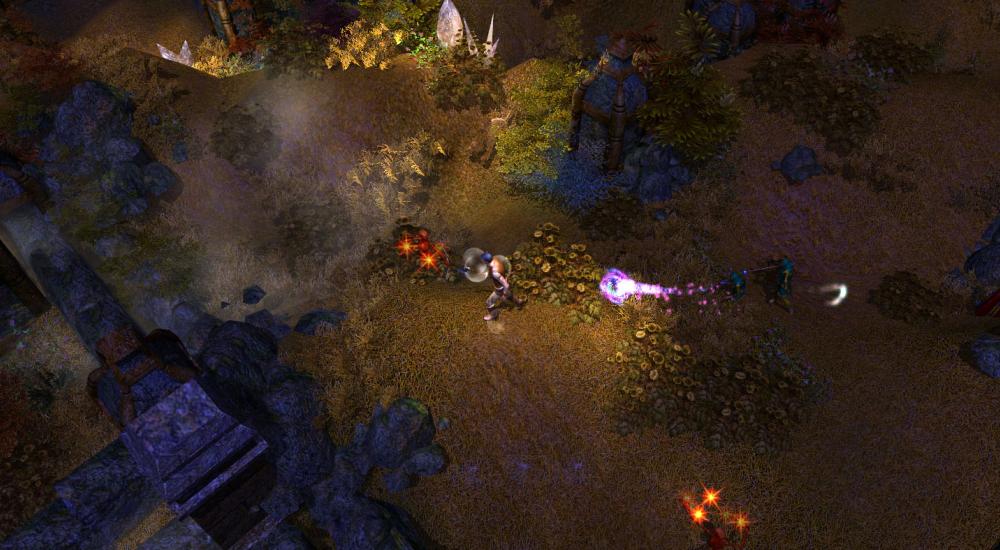 Soldak's got a new action-RPG, Din's Legacy, and if you've ever played a Soldak game, it's definitely more of that particular style of "cRPG meets aRPG from the late 90s." Basically, if you've ever looked at Path of Exile and thought, "sure, but could there be MORE systems," then you really need to take a look at Soldak's catalog.

Din's Legacy very much follows in the footsteps and world of Soldak's previous fantasy titles, Zombasite and Din's Curse. You create a character, level up, find/equip loot, get attribute points to increase character stats, and get skill points to put into different skills (passive and active). There's class hybridization (more on that in a bit), item identification and durability, and a dynamic world where monsters have their own agency and will actively kill NPCs to level up. Finally, just like previous Soldak games, you'll have a lot of customization options when you first create your play session; from the base enemy level to how quickly things happen in the world, you're in full control of just how difficult you want it to be. This also gives you some control over the kind of co-op session you'll have. If you want something quick and fun, you can pick a "Tiny" map and set a few other options to ensure you can get in and out in about an hour or less. If you're looking for something more in-depth and challenging, then you can make it a humongous map and settle into a long campaign.

It's a lot to take in at first, but after a few play sessions, you'll get a good grasp of the basics. There's really no penalty or consequence to starting over with a new character as your previous one will always be there to go back to if you want, so feel free to experiment and "explore the space" before settling in with a dedicated character. Once you do, you can start digging into one of the new features for Din's Legacy that's pretty interesting.

Class hybridization has always been a part of all of Soldak's games, but the approach in Legacy feels pretty fun. Rather than unlocking a "sub-class" or another specialty at a certain level, you can choose another class to "mutate" into by using a mutation point. For instance, your initial class may be a Warrior, but you notice you need a little more healing so you decide to mutate with the Healer class. When you do, the game looks at every skill in your skill tree that you haven't spent skill points on and does one of three things: keeps it, replaces it with a skill from the new class, or replaces it with a skill from some other class. All of that is determined by RNG behind-the-scenes so you never know quite what you're going to get. Maybe you get a skill you really wanted, or maybe you end up with one you didn't even know about. Beyond these intentional mutations, though, every time you level or die, you also have a chance to get a random mutation that could prove beneficial (such as a new effect for a skill) or detrimental (like "fearing orcs" and doing less damage to those enemies).

This degree of player randomness comes in addition to the overall world randomness. Every time you create a new area in which to go questing, the layout/setup is different. You have some control over it in the customization options (such as the overall size of the area), but the names of the different zones, the enemies you encounter, the different clans, etc, are all randomized. Additionally, your overarching objective/mission changes each time, too (there are 56 different objectives total). In one area, you may have to hunt down and kill a particular enemy; in another, you'll have to survive against waves of foes. All of this gives Din's Legacy an almost "rogue-lite" feel where you'll start a scenario and try to clear it before starting the next. Win or lose, too, you can use the same character with all of their skills and gear in the next one.

I've always appreciated Soldak's games, even if they weren't always for me. Din's Legacy is the first one where I really feel like I could spend some time with it and experience something new/different each time I do.

Din's Legacy is available via Steam Early Access. While there is no hard set player limit (the only limitation is the host's computer performance and network stability), we've listed it with a 16 player max for both online and LAN. Co-op is fully supported throughout and players will be able to progress their own characters in the host's world, keeping all experience and gear earned.