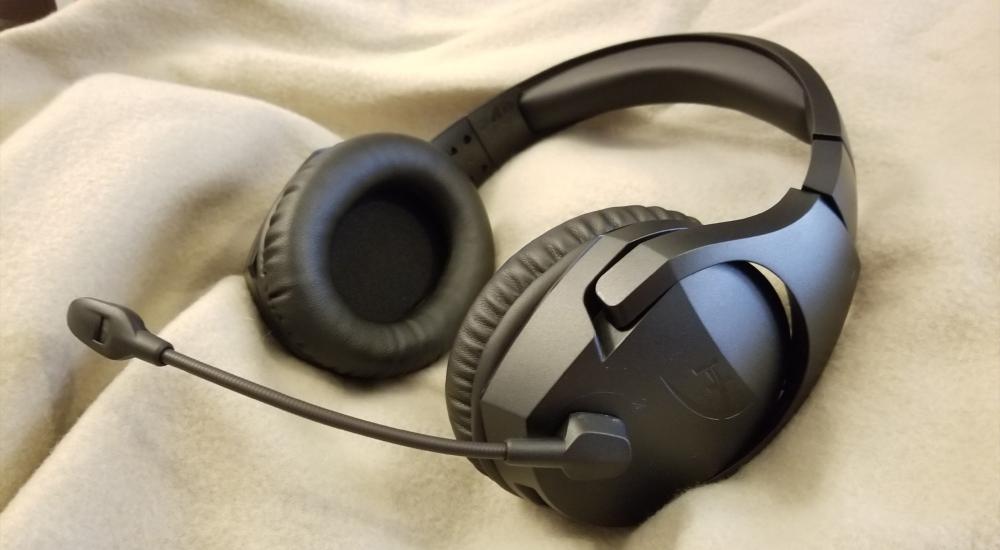 The Cloud Stinger Wireless is fairly basic in its functionality and features, being structurally composed of a simple telescoping band with the trademark HyperX leatherette-encased memory foam along the inner top of the band and earcups. The earcups swivel 90 degrees so they can lie comfortably flat against your shoulders when you pull the headset around your neck. The right earcup features a volume wheel while the left one houses the power button, power-indicating light, micro USB charging port, and adjustable wire mic (which can swing up for storage and also mutes the microphone). The headset comes with a USB to micro USB charging cable and USB receiver. Like every other HyperX headset I’ve reviewed, the Cloud Stinger Wireless is plug-and-play, meaning you just plug the receiver into a device with a USB port, turn on the headset, and you’re good to go. The receiver blinks with a blue light when it’s ready to receive, which becomes a static blue light when the headset is on and correctly receiving audio. As a sidenote, I was curious if these HyperX receivers were interchangeable, so I attempted to use my Cloud Flight receiver with the Cloud Stinger Wireless. Turns out they aren’t (which makes sense), but it made me appreciate one detail HyperX made. The two receivers look identical, but when plugged in, the Flight’s receiver blinks orange while the Stinger Wireless’ receiver blinks blue. This will make my life a whole lot easier if I ever accidentally toss both receivers into the same bag and need to figure out which is which.

In the past, I’ve praised HyperX’s headsets for being the most comfortable I’ve ever used and the Cloud Stinger Wireless is no exception. I can wear it for hours with no discomfort whatsoever. I had no issue with the battery life longevity and I found the sound quality to be immersive. Since I’ve previously reviewed both the original Cloud Stinger headset and the Cloud Flight (the two headsets it makes the most sense to compare against the Cloud Stinger Wireless), I thought I’d talk about the features like battery life, pricing, audio quality, and microphone quality in terms of comparisons against them.