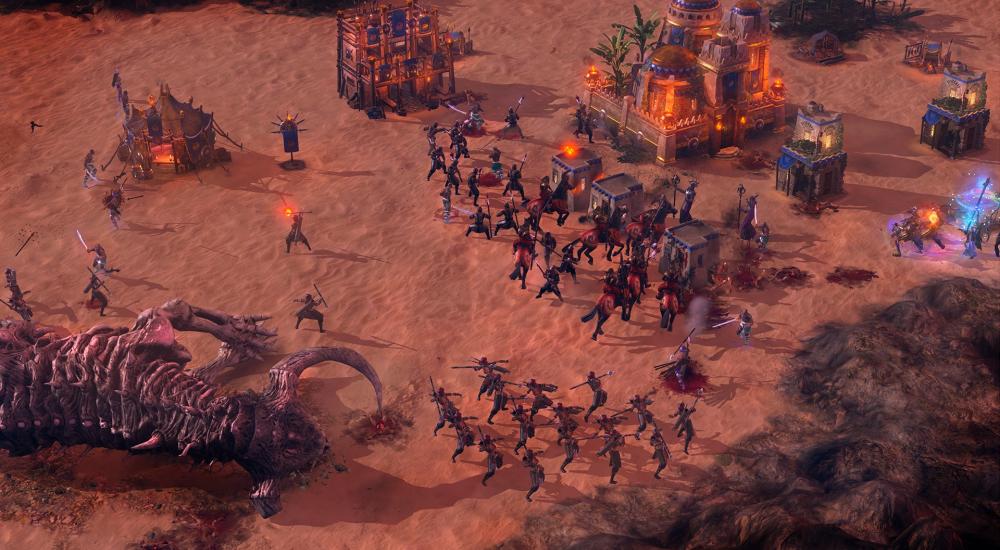 What is best in life? Well, Nick and Jason decided to see for themselves in Conan Unconquered. This survival RTS from Petroglyph (ex-Westwood devs and the team responsible for the 8-Bit series and Grey Goo) puts players in a slightly different role than most other games in this genre. Rather than building up a base and a massive force to roll over your opponent, you're trying to build up defenses to prevent being overwhelmed by the approaching hordes.

The biggest factor contributing to your success/failure in Conan Unconquered is not your actions-per-minute (you can pause at any time and queue things up), but rather your ability to manage resources, of which there are two types: flat and generated. Flat resources (thralls, command points, food, souls) are very limited that are "one and done." When you construct a building that generates these types of resources (such as a "hunter shack" for food), that's all you'll get from that building. Once you spend it, either by generating units or as a cost for another building, you don't get it back.

Generated resources (gold, wood, stone, etc), on the other hand, are provided every 25 seconds so you're guaranteed to have a somewhat steady supply. The catch to the generated resources is that because they're provided on a fixed timer, you can quickly run out and then you're stuck waiting for the next resource dump to be able to do anything. Added on top of all that, you can only build within a certain area of influence demarcated by your "Battle Standards" (think "pylons" from Starcraft). If you want to expand your base out further, then you'll need to build more battle standards, which costs resources that could be spent elsewhere. Is it worth the expansion? Maybe; depends on how well you'll be able to defend that expansion and how long/where the next wave of enemies will be coming from. It's all a careful balancing act and it gets even more interesting when playing with another person.

When teaming up with a buddy online, all resources are split between the two players, with uneven amounts getting rounded up to the player that owns the building. For example, when you build a hovel that generates five gold, you get three gold and your partner gets two. Resources are spent individually by each player, which is good, but it does mean you'll need to build twice as many structures to get the same kind of returns you'd see if playing solo. Armies are generated individually by player (i.e., each player will need to make their own "Training Ground" to create units) and can only be controlled by that player. Research buildings that unlock new upgrade options fall under the purview of whoever constructed it, but the results of the research are shared. In other words, if you build a "Craftsman Guild," you choose what gets researched, but your buddy will also benefit from the upgrades provided by that research. Resource management becomes an even greater challenge with two people, but in some ways, it also feels like a good balance given just how strong the hero characters are.

The heroes are stronger and tougher than the other units in the game, and get even better once they've accumulated some experience and earned a veterancy rank, which unlocks a special attack ability that can be used every minute. These abilities can help turn the tide of battle at a key moment and ensure your defenses hold against the Stygian hordes. If your hero dies, they'll automatically resurrect at your fortress after a brief period, so you're somewhat free to be reckless with them. Given how strong these characters are compared to the standard rank-and-file, having two of them does provide you with an advantage in the early waves so you can try to get your defenses/resources in place for the later ones where you'll need more than just those heroes.

I really like what I've played of Conan Unconquered thus far; it's one of those games that feels familiar yet different. My usual strategy when it comes to RTS titles is to "turtle" and build up a strong force; even though the whole point of Unconquered is to hold up inside your base, the mechanics of the game don't let you do that comfortably. You need to push out a little bit to find resources, but you don't want to extend too far. You need to explore with your heroes/units to find the random chests of materials that are scattered about and attempt to gain some veterancy levels, but losing any units can be quite costly. You're always wondering "is this what I should be doing now?" and weighing the pros/cons of different actions. That's a part of any RTS, without question, but it all feels so different with Unconquered and it feels good.

Conan Unconquered is available via Steam. Two player online co-op is supported in the co-op mode.