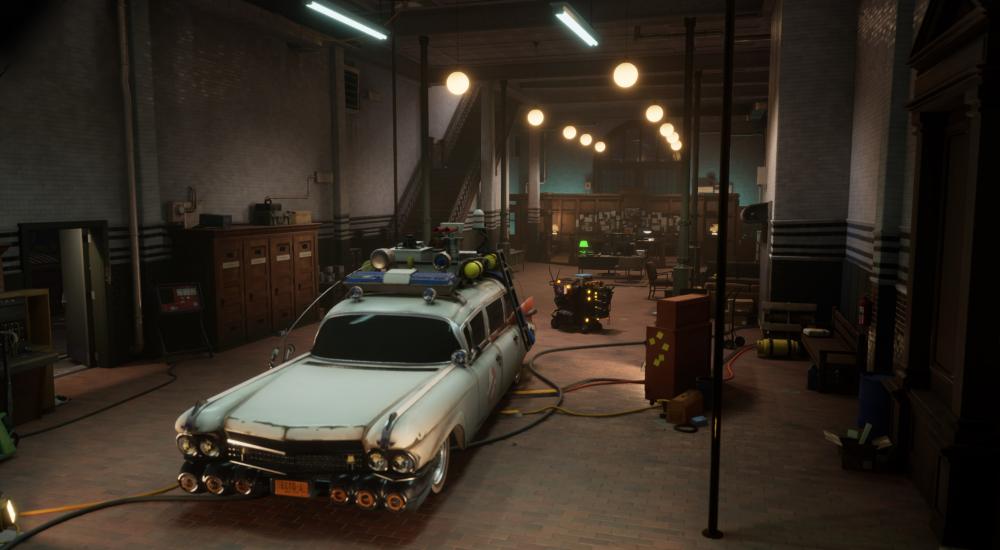 Illfonic's latest 4v1 multiplayer game, Ghostbusters: Spirits Unleashed, arrived last week to scratch that certain itch you've been feeling for a while now. You know the one; you strap on a Proton Pack, pull out your PKE Meter, crank the Ray Parker Jr tunes, and destroy just a few chandeliers while trapping a class-five full-roaming vapor.

Set after the events of Ghostbusters: Afterlife, Ghostbusters: Spirits Unleashed puts you in the boots of a newly hired trainee of the recently reopened Ghostbusters business. Ernie Hudson reprises his role as Winston Zeddemore, who is funding the new operation, and Dan Akroyd is still Ray Stantz serving as a kind of adviser while running the occult book shop next door. Alongside the familiar fan favorites are two new faces: operations head Catt, and the stereotypical socially inept research guy, Eddy. Once the introductions are out of the way you're sent off on your first ghost hunting mission (i.e., tutorial) with A.I. companions. If playing with friends, you can you all team up and take on an A.I. controlled ghost.

When playing as a Ghostbuster you're given all the recognizable tools of the trade; your Particle Thrower is slung into the Proton Pack on your back, your PKE Meter is in its hip holster, and your trusty Ghost Trap is hanging on your belt ready to be thrown at a moments' notice. There are also a few new gadgets added to your loadout, including a grappling hook to help you navigate between floors, a motion sensor that will send out a little ping if there's any movement within its range, a cloud of particles that slow the ghost down for a limited period of time, and Ecto Goggles that will highlight an object if it's currently being possessed by the ghost. Initially you'll only have access to the grappling hook and unlock the others as you increase your player rank by completing matches, along with new outfits and accessories to wear.

Speaking of matches, the bulk of your time playing as a Ghostbuster will be spent looking at your PKE Meter trying to get a fix on the ghost or one of its rifts, which essentially act as extra lives for the non-corporeal entity. Once you've located the spirit then it's bustin' time; throw down a trap, tether the phantom with your Particle Thrower, and try to guide the ghoulie into its new home. If you haven't located and destroyed the three ghost rifts that are randomly scattered around the map, then the adversarial apparition will respawn at one of them. This destroys the rift but you'll have to track down and capture the spook again. Should you succeed in eliminating all the rifts and trap the wraith before it fully haunts the location by filling up the haunt meter, you win!

After every match, win or lose, you'll earn experience points based on a number of actions (such as calming citizens, collecting fungi, minimizing property damage, trapping the ghost by yourself, etc), which in turn increases your player rank and grants you the rewards mentioned earlier. Your gear - specifically the Particle Thrower, Proton Pack, PKE Meter, and Ghost Trap - will also earn experience as you use it, which unlocks new customization options that grant both positive and negative effects. For instance, you can change the nozzle on the Particle Thrower to make it easier to tether ghosts but has the downside of causing it to heat up faster. While it didn't feel like any of these customizations had any big gameplay impact, it was kind of fun to tweak things to create my own unique setup. After completing a few of these matches as a Ghostbuster, you'll hit a story beat where Ray gets the original Tobin Spirit Guide, at which point there's a tutorial on how to play as the ghost, i.e., the "1" in "4v1". While our focus is on playing as a team against an A.I. controlled opponent, I'll quickly say that engaging in the 4v1 with friends can be a lot of fun and a great opportunity for your one friend that enjoys trolling (everyone has one) to get their kicks. Once the tutorial is done, it's back to playing more matches until you've seen all there is to see of the story, which is all told via cutscenes. I'll avoid any spoilers but don't expect anything big. With the story done all that's left is to... yeah, play more matches. There's not much depth or substance here, but that isn't exactly surprising.

Ghostbusters: Spirits Unleashed is an asymmetrical multiplayer game so of course the focus is getting players into matches that are designed to have a few tense moments and then resolve rather quickly to get players into another match. You can play cooperatively with friends against an A.I. controlled ghost, but that isn't what the game was designed around. Compared to a human-controlled ghost the A.I. tends to be a bit more of a brute just charging around so locating it and capturing it happens relatively quickly. In most of my co-op matches, I rarely had time to locate and destroy a rift as it was easier and quicker to just recapture the ghost. I really wish there was more to the co-op side of things - like a big boss fight or some kind of investigation aspect, maybe even a horde mode -  but it's not what the game is about. Ghostbusters: Spirits Unleashed has a set idea of what it wants to be and, for the most part, it nails it. As Mike stated in our stream the game really feels like it would have been one of those outstanding "Summer of Arcade" titles back when XBLA was a thing. Realistically, the most important thing any Ghostbusters game needs to do is capture what one would assume it would be like to strap a small nuclear reactor to your back and fire off a plasmic stream of positively charged ions; and Spirits Unleashed does. All the iconic sound effects are present, there's a little recoil/buck to the Particle Thrower that you have to lightly fight against, and you can throw your trap then activate it separately with a quick button press. It's a really good feeling. Perhaps the biggest downside is ultimately the limited number of maps (there's 5 total) and ghosts to battle right now, but Illfonics has confirmed in a tweet that more will be added in the future as free DLC.

At its $40 price tag, Ghostbusters: Spirits Unleashed is a bit too lacking in depth to really recommend. If it's ever on sale, though, I'd say it's worth picking up to enjoy for an evening or weekend of gaming with your buds and then checking back in on every couple of months or so to scratch that ghostbustin' itch and see what's new.