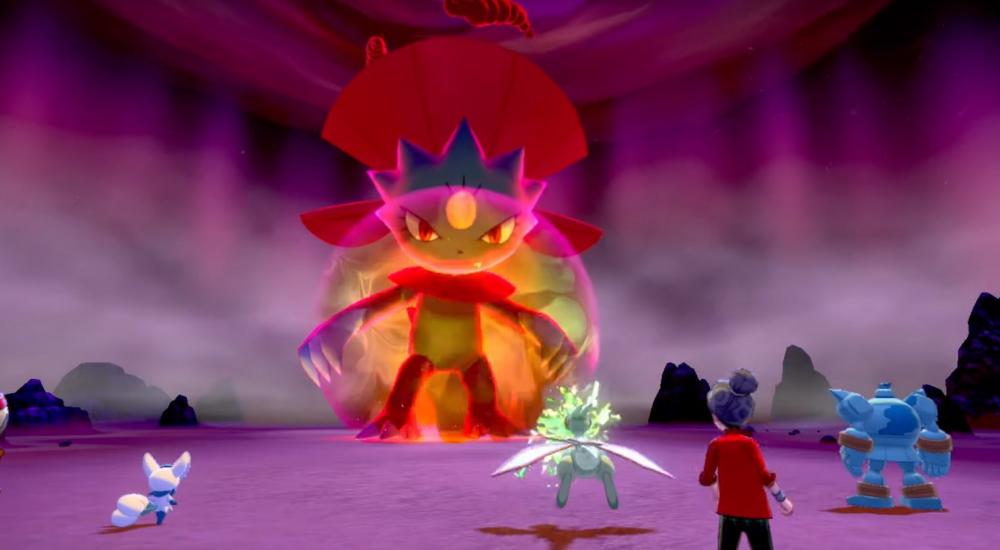 Last week, Nintendo held a special Pokémon Direct that was focused entirely on the two forthcoming games for the Switch: Pokémon Sword and Pokémon Shield. Similar to past titles in the popular franchise, you'll be running around a fictional world with all sorts of wild creatures for you to capture, train, and use in battles. Those battles - whether against other players or the various Gym Leaders - have always been a big part of the Pokémon series, but they're about to get even bigger with a new co-op feature: Max Raid Battles.

Within the world of Pokémon Sword and Shield, you'll be able to trigger a special phenomenon called "Dynamax" to make one of your Pokémon bigger, stronger, better, etc. (this appears to be similar to the idea of "Mega Evolve" from past games). While in Dynamax form, your Pokémon's moves become more powerful; however, the effect only lasts for three turns in combat, so there's definitely a strategic element to consider when using it. Your Pokémon aren't the only ones that can take advantage of this, either. Occasionally, you'll encounter wild Pokémon that have been "maxed out" and you'll need some help to try and tame/capture them. This is where the Max Raid Battles come in, which sound similar to the ones that were added to the wildly popular Pokémon Go on mobile devices.

When you're running around the Wild Area of Pokémon Sword or Shield, you'll see these pillars of purplish/pinkish light. Head towards one of those pillars and you'll be able to engage in a Max Raid Battle. You can team up with three other players locally via the Switch's wireless LAN capabilities, or team up with players online (a Nintendo Switch Online subscription is required for this). As a group, you'll work together to battle a maxed out Pokémon that remains in that Dynamax state throughout the entire encounter. One player on the team will be able to use Dynamax on one of their own Pokémon, which means you'll need to do a little coordination to use that at the right time. If you manage to weaken the Pokémon enough, everyone will have a chance to capture it. Don't worry if there aren't any other human players around, either; per the feature description on the official website, "if three other Trainers aren’t available to participate in Max Raid Battles, support Trainers will automatically be added to your side to help you battle the wild Dynamax Pokémon."

The full Direct is below, but if you're only interested in the Max Raid Battles, jump to the 9:30 mark.

It's worth noting that the types of Pokémon you'll be able to catch vary depending on where you are in the Wild Area, the time of day, and the weather. There are some Pokémon that can only be caught through these Max Raid Battles, too.

Pokémon Sword and Shield will be released on November 15, 2019 on the Nintendo Switch. Four player local wireless co-op, or four player online co-op, will be supported in the Max Raid Battles. If you're interested in picking up either game and would like to support Co-Optimus, you can head over to Amazon via this link and get it from there.