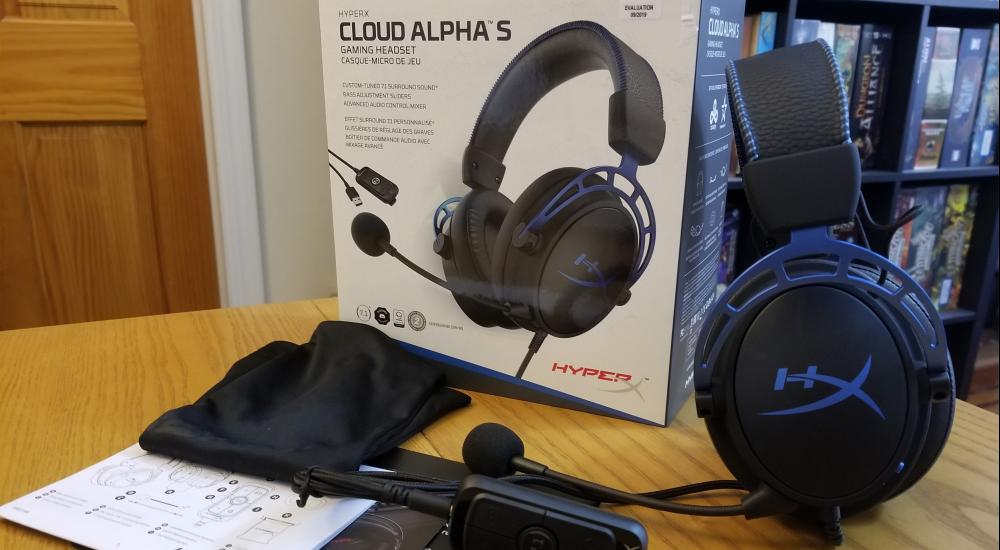 While many of HyperX’s most recent headsets have focused on mobile gaming/devices (whether that meant wireless technology, bluetooth functionality, or the minimalist earbuds structure), the Alpha S is a return to HyperX’s PC gaming roots. Building upon the Cloud Alpha’s framework of a dual chamber system (one for bass, one for mids and highs), the Alpha S adds on a special audio control mixer, which we’ll touch upon shortly.

Structurally, the Alpha and Alpha S look quite similar, with the same sturdy metal frames, soft leatherette-encased memory foam earcups/headband, detachable noise-cancelling microphone, and braided cable that extends about three feet to terminate in a 3.5mm jack. This makes the Alpha S compatible with any system or device that uses that type of connection, like a phone or a PS4. The biggest difference, however, is that while the Alpha’s 3.5mm jack could plug into another braided cable to convert into two 3.5mm audio and microphone plugs, the Alpha S plugs into an audio control mixer whose cable extends to end in a USB plug. This mixer is somewhat similar to the Cloud Revolver S’s mixer, since both possess a surround sound button. The other usual suspects are located on the mixer as well: volume up and down buttons on the front, microphone mute button on the side, and even a shirt clip on the back. The Alpha S’s mixer doesn’t just let you tweak your sound settings and add 7.1 surround sound, though. It features a unique chat/game audio balancer. Rather than having to set these individually on your computer, you can just push either the game volume button or the chat volume button and the associated applications will get louder while the non-associated applications will get quieter. Once you have it correctly set up, in technical terms it’s “pretty darn nifty.” While I’m sure this kind of functionality has existed before in other gaming headsets, I’ve never come across it myself and it’s a first to HyperX’s headset line-up. I’m a big fan and when I review future headsets, I’m sure I’ll miss this feature. As someone who is constantly using voice chat programs when I play games with friends, it’s so convenient to be able to tap a button a couple of times while I’m in-game when someone is being quieter than usual on Mumble.