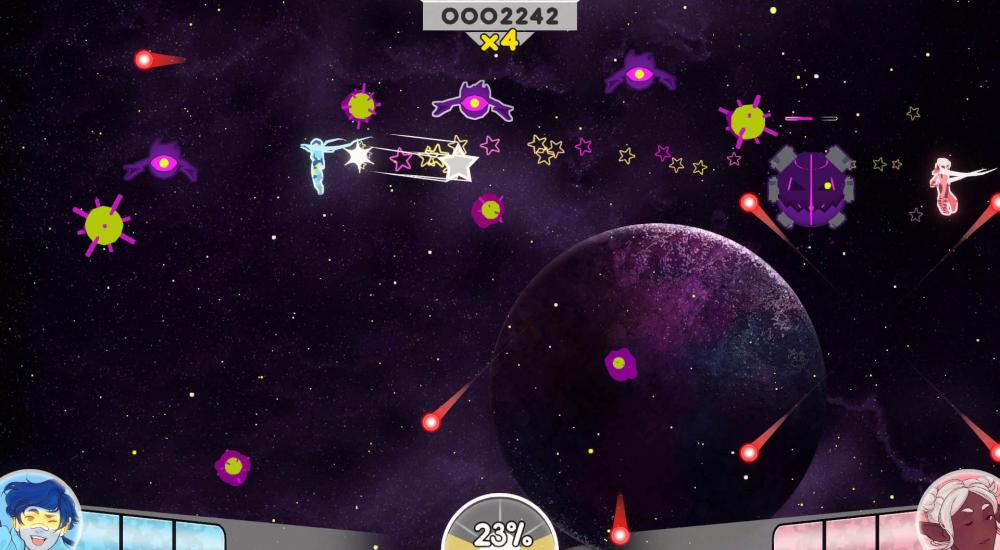 Sometimes I like to be pleasantly surprised when I read about a game that I wasn't following. StarCrossed from Contigo Games seems to fit that bill. The SHMUP genre of the game caught my eye, but when I read about its co-op focus I was really intrigued. I may not be a huge fan of the "magical girl" aesthetic, but I'm willing to give it a try.

StarCrossed is an action arcade game with a magical girl aesthetic and a cooperative twist centered around themes of togetherness and unity. Featuring both a Story Mode and an endless Arcade mode, StarCrossed has been designed from the ground up for two player co-op action. Players choose a pair from an inclusive cast of five playable characters, each with their own unique ultimate ability and personality, and see their relationship develop over the course of a space journey filled with adventure and sparkles!

Each character pairing brings a unique perspective to Story Mode, allowing for ten different experiences of the story as they travel from planet to planet, working together to strengthen their bonds and defeat a looming evil that threatens the galaxy!

The focus on not only the bullet hell aspect, but having to keep the star moving between players seems like an interesting twist on the traditional SHMUP genre. Check out the trailer below to see how it all plays out.

StarCross is a two player couch co-op game out on April 29th on Nintendo Switch, Xbox One with a PlayStation 4 version coming later this year. The PC version available now via Steam. The game cost $9.99.