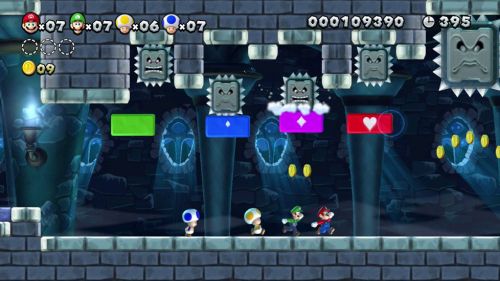 Happy Monday, people. This week we have a whole mess of games releasing to coincide with the launch of the Wii U. Let's do this.

Ben 10: Omniverse (360,PS3,Wii) Hey, Cartoon Network! This does not look like a Samurai Jack game. Oh well. Play as Ben 10 and his new pal, Rook, in this alien powered adventure. 2 player local co-op

LEGO The Lord of the Rings (360,PS3,Wii,PC) Fun fact: if you enter up, up, down, down, left, right, left, right, B, A, the Eagles just pick up Frodo and take him to Mordor. Game takes like two minutes. Ok, not really, but it would have been cool. 2 player local co-op

Magical Drop V (PC) It's a puzzle game that features some cute anime characters. And by "cute," I mean in the wholesome way. Not that other, lonelier, way. 2 player local co-op

Boom. Wii U cooperative launch titles. Check them out.

Assassin's Creed 3 (WiiU) The four player Wolf Pack mode forces players to work together to advance. Seriously. Don't run around face-stabbing every target as soon as you see them. Why do you all suck so bad at this? I don't mean you, personally, but I do mean EVERY SINGLE FOOL I'VE HAD THE DISPLEASURE OF BEING GROUPED WITH IN A PUBLIC MATCH. Maybe Wii U players will actually try to communicate. 4 player online co-op

Ben 10: Omniverse (WiiU) Like the listing above, only this one has that new system smell. 2 player local co-op

Call of Duty: Black Ops 2 (WiiU) Also like the listing above, but for some reason this one has no delicious new system scent. Maybe it's a little stale? 2 player local co-op, 4 player online co-op

Epic Mickey 2: The Power of Two (Wii,PS3,360,WiiU) Oswald the Lucky Rabbit and Mickey Mouse team up to save the Disney characters. I actually have no idea what's going on in these games. I looked at the box art and took a guess. Feel free to correct me in the comments.  2 player local co-op

Just Dance 4 (WiiU) The Wii U version of Just Dance 4 features an exclusive Puppet Master co-op mode which allows one player to use the Wii U tablet to control the upcoming moves for the other dancers. This could make things interesting. 5 player local co-op

Mass Effect 3 (WiiU) You've probably already beaten this game, complained about the ending, and Game Stopped it for something that came out this fall, like Borderlands 2 or Halo 4. If you haven't played it yet, and you're getting a WiiU, you should probably pick it up. I've heard good things. 4 player online co-op

Below you'll find most of the retail releases for the week, including their Amazon links. If we missed anything please let us know in the comments section.