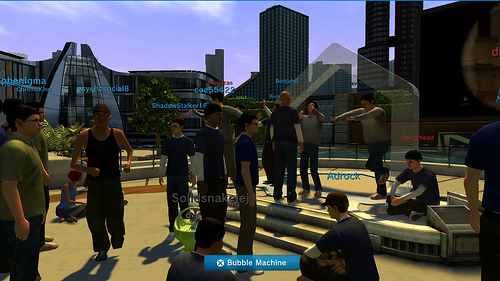 Sony has announced that their Home "service" is launching tomorrow to most regions around the world in the form of a public beta.  We had posted some impressions before, but now everyone will get their hands on just what this service entails.

And what does it do?  According to the PlayStation Blog there will be "parties, tournaments, and events."  Um, ok.  There's also mini games like "Saucer Pop" - please contain your excitement.  There's also bowling, pool and a few other mini games.  You'll find specific areas for publishers content themed after some of your favorite games.  And of course, there's avatar and space customization.

Notably absent is the ability to use the service to launch other games.  Similar to the Xbox Live Party system, Home was originally planned to allow people to meet up in a similar place in the game world and then launch directly into multiplayer sessions of games.

We'll hold judgment until we actually play around with Home tomorrow, but right now expectations are luke warm at best.