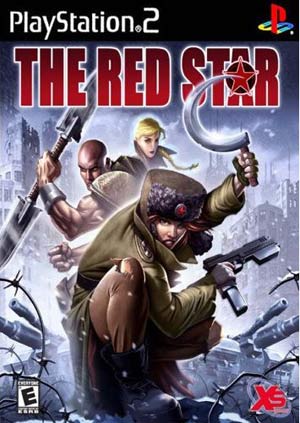 Добро пожаловать (Welcome), comrades!  As Jim highlighted in last week’s “This Week in Co-Op,” sometimes a great co-op experience can be found lurking in the catalog of last gen’s titles.  So this past weekend I dusted off my copy of one such co-op title that was overlooked when it was released, The Red Star, and decided to give it a run through.  With my partner in tow, we stepped into an alternate Russia where two soldiers seek to put an end to a corrupt government being lead by a mystical, and evil, sorcerer known as Troika.

The Red Star, a video game based on the graphic novel by Christian Gossett, combines three different, common gaming genres into one game: action brawler, RPG, and bullet-hell/shoot ‘em up.  I had played this long ago when it first came out, and didn’t remember much about it except that about halfway through the game, the bullet-hell aspect of the game really comes through.  Since my friend is a fan of that particular genre, I figured that bringing him along to help take down Troika’s tyranny would be the perfect choice.  I believe, however, that by the end of our game my friend wished he had played the game solo rather than struggle through a bullet-hell shooter with a partner that attracts bullets. My partner gravitated towards the speedy, slight, and young warrior, Makita, so I went with the only other option presented to me, the burly, bald, and brusque bodyguard, Kyuzo.  One character that’s really strong and another that’s really fast: it’s a natural kind of pairing and one that would serve well for most action brawlers, but there’s that sticking point of the “shoot ‘em up” aspect.  Each stage is split up into a mixture of brawler and shoot ‘em up segments and at the end of a stage you earn points that can be spent upgrading various aspects, such as defense, weapon strength, and your Protocol (read “super strong charge up”) attack.  The brawler segments are typically those sections in between bosses, and rely upon a combination of shooting and melee combos (which are named for various philosophical and scientific principles).  The boss sections are where the bullets really start to fly and when we got to our first boss, I could tell already that my partner was going to breeze through most of these encounters.

While the bullets weren’t exactly pouring out from the boss like water from a shower, my partner was never-the-less dancing about the game screen like a ballerina.  I’ll fully admit that there was a certain poetry in the way he was able to dodge bullets that seemed to only just barely miss him as he unloaded his own stream of bullets.  It was so amazing to watch that I temporarily forgot to move my character.  However, as I quickly discovered, moving my character about really only prolonged my eventual demise and I was probably better off, in some ways, simply standing still.  Let’s just say that when it came time for me to put my bullet dodging skills to the test and do my intricate dance in and out of the narrow gaps between streams of bullets, the phrase “steers like a cow” popped into my head quite often. When I wasn’t plowing through bullets like Pac-Man through pac-dots, things were going really well.  Kyuzo, despite his slow movements, was performing admirably at decimating enemies with his sheer brute strength.  What took my partner 7 or 8 hits to take down one enemy, I achieved in just a few deft strokes of my weapon.  Being able to tease my partner with “oh, is this guy causing you trouble? Here let me just take care of that” helped soothe my bruised ego some, and the fact that I was the one keeping my partner from getting completely overrun probably kept him outright grabbing the controller from me during boss fights and playing both characters at the same time (something I’m pretty sure he could do with a combination of twine, feet, and a drinking straw).  We eventually found ourselves falling into a natural sort of balance.  Since he was fast, shooting a lot, and not getting hit too much, he powered up his guns and Protocol attack.  Since I was the equivalent of a rolling ball of meat (but twice as strong!), I focused on my defense, melee attacks, and basically trying to stay alive long enough for him to kill the boss.  As I said before, a natural pairing.

Unfortunately for us my friend had to leave for a “prior engagement,” so we’ll have to tackle Troika another time.  I’ll be training, however, so that the next time I face an evil Communist government that’s lead by a sorcerer who employs an army of evil minions that can fire more bullets than a Michael Bay film I’ll be prepared… to hide behind a rock.