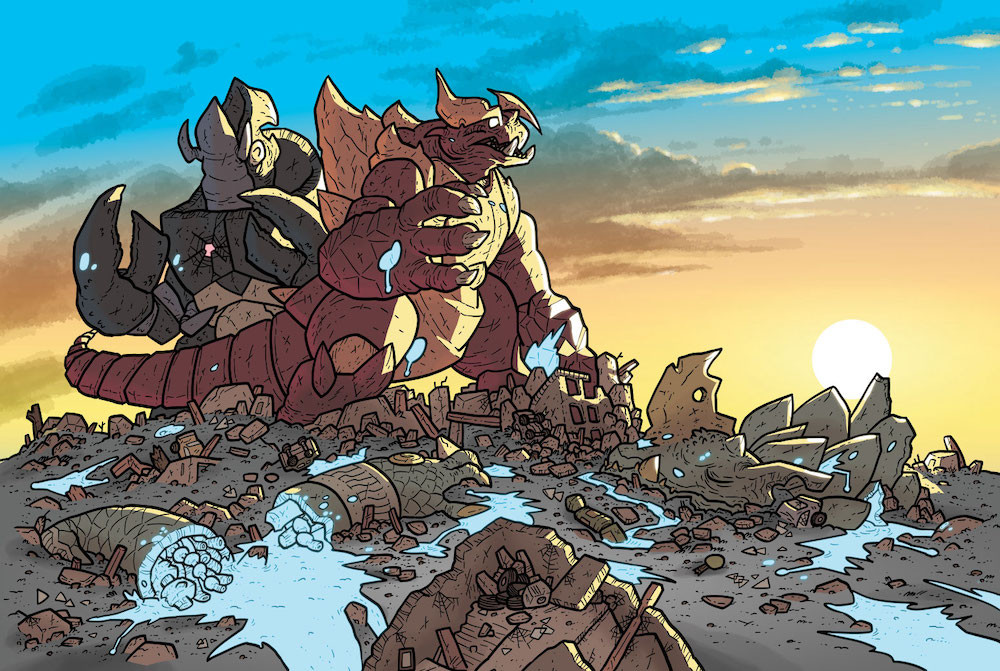 WayForward, the studio behind River City Girls and the Shantae series, is teaming up with fellow indie developer, 13AM Games (makers of Runbow), on a monster-themed beat 'em up. Dawn of the Monsters looks like a spiritual successor to the classic Neo Geo series, King of the Monsters, and will feature 2-player local co-op. Kaiju fans won't have much longer to wait, thankfully, because Dawn of the Monsters is due to release on consoles and PC next month.

Today's new trailer reveals the story behind Dawn of the Monsters' kaiju-on-kaiju battles. The earth has been invaded by giant monsters called Nephalim (a biblical reference). For 30 years, humanity fights against the giants but fails to thwart them. Finally, scientists somehow recruit four kaiju of their own, giving mankind its last and best chance to save our planet.

The four playable characters are: This game features some serious kaiju cred. It seems that WayForward and 13AM Games have recruited a Who's Who of artists specializing in bringing monsters to life. These artists include:

There are a few cutesy kaiju games out there, but this won't be one of them. Dawn of the Monsters is a serious, non-comedic game that aims to please giant monster enthusiasts and beat 'em up fans alike. Not only do the creatures look very cool and authentic, but the real-world cities featured in the game are fully destructible. We're especially excited about the chance to team up and save everyone while destroying everything (EDF style) in 2-player local co-op.

Dawn of the Monsters will arrive on Xbox One, Xbox Series S|X, PlayStation 4 and 5, Switch, Stadia, and Steam sometime this March. It will cost $29.99.