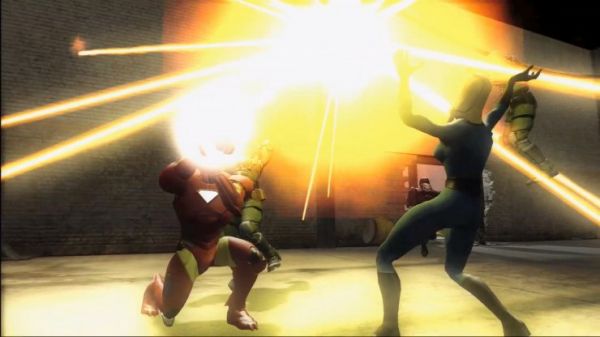 The first Marvel Ultimate Alliance game had comic book fans absolutely giddy.  So many classic characters, a huge variety of settings, and stellar co-op gameplay made for a great experience.  If there was one weakness, it was the somewhat random nature of the plot.  Then again, it's hard to argue with a game that lets you use a SHIELD Helicarrier's anti-air cannons against an ancient green dragon named Fin Fang Foom.

The drool-worthy sequel looks to have a more tightly integrated plot.  The events of the Civil War storyline, which ran through Marvel comics a few years ago, will be adapted for the game.  After a major event (no spoilers in the link), the super hero community is divided.  Iron Man leads one faction, which complies with government regulation and registration of all heroes.  Captain America and several others do not comply, and thus old friends find themselves on opposite sides.  Usually, when this happens in comics, it means mind control or dopplegangers, but not this time!  Who will the player choose to side with?

Now our version is kind of a ‘what if’ take on it. We didn’t follow the storyline exactly for a number of reasons. One of which is we wanted to allow the player to choose. And in the comics, of course there was only one way that things went, and we wanted the player to be able to choose to help either side try to win the war.

I find this brilliant, as it adds tremendously to the replay factor, which was already strong in the first M:UA game.  Another element is to only moderately limit character choice once the player has picked a side.  Iron Man and Cap will likely be unable to work together, for example, but it won't cut the rest your choices in half.  This will leave some combinations available in the game that were not in the comics.  Iron Man and the Invisible Woman, pictured above, were on opposing sides in the comics, but will likely be playable together in the game.  Can't wait for this one!

Speaking of Marvel, did anyone else see that Marvel vs Capcom 2 was announced for XBLA and PSN?