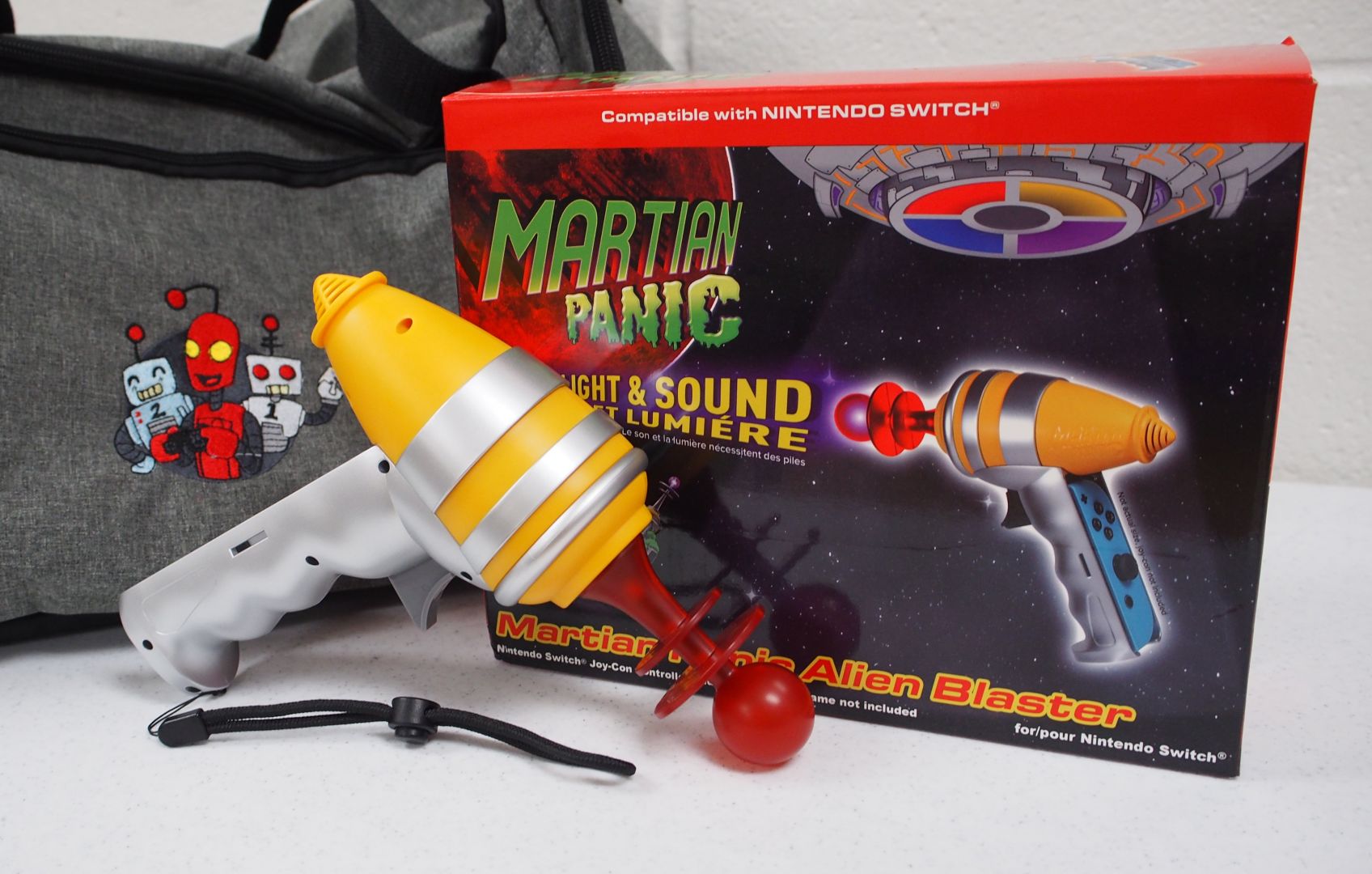 The Switch is no stranger to light gun-style games, but these games lack a certain authenticity when played without a prop gun. That's where the Martian Panic Alien Blaster from Fun Box Media comes in. Originally bundled with the game, Martian Panic, the blaster turns a Joy-Con into an alien blaster with lights and sounds. It's a unique accessory that works with games like The House of the Dead Remake, not just Martian Panic.

The blaster is basically the same size as a real pistol, though with a cartoony retro sci-fi design. The handle measures about 4 inches (11 centimeters) long. The body clocks in at 8 inches (20 centimeters). It's a hefty accessory that feels good to hold. The back of the handle has a place for a single Joy-Con to snap in. Without the Joy-Con, the handle feels awkward at the back, but the toy can still be wielded. The trigger has nice resistance and a good click to it. Inside the blaster's handle, lies a compartment for two AAA batteries (not included). The compartment must be opened with a tiny Philips screwdriver - a slight nuisance. Once batteries have been inserted, the blaster can be turned on via the a switch just above the handle. When turned on, the red barrel of the blaster lights up and a cool laser sound effect emits from the speaker at the back of the body. The lights and sounds are completely unnecessary when using the blaster as a controller, but they do make it a great toy all on its own.

How is the blaster for gameplay? That depends on the game. First, the blaster can only be used with games that support the use of a single Joy-Con, such as Martian Panic and The House of the Dead Remake. Sega and Forever Entertainment's zombie-themed shooter requires some fiddling with the menus to enable gyroscopic aiming and playing with only one Joy-Con. Note that with Martian Panic and most games you'll play with this accessory, you'll probably have to hold the L and R buttons on the Joy-Con after launching the game, and you'll have to remove the Joy-Con from the blaster to access those buttons. That's probably an unavoidable quirk of the Switch's user interface, but it adds a slight hassle to this accessory.

Martian Panic itself is, surprisingly, not that good with the blaster. First, the game's a buggy mess with terrible controls, which we'll talk about in our review. Martian Panic wants a line of sight from the top of the Joy-Con to the screen. If you're playing with the Joy-Con inside the blaster, you'll basically end up with the barrel of the gun pointed downward because of the direction the Joy-Con needs to point. Maybe I'm missing something with the game's horrendous calibration interface, but pointing a gun the wrong way while playing a shooter doesn't enhance the experience. See our co-op review for more details. The House of the Dead Remake is a different story, thankfully. It took a little trying to get the settings just right; they're pictured above. This lets you play entirely with the pistol (using the right Joy-Con), ignoring the left Joy-Con during gameplay. The analog stick can be used to adjust the position of the cursor, re-centering it if the gun barrel doesn't align properly with the cursor. You're still moving a cursor around rather than having a true light gun experience, but it still feels great to play the game this way. House of the Dead fans who crave a more authentic experience should give the blaster a look. There are other light gun-style games and rail shooters for Switch that would probably work well with the blaster, but I only own the two mentioned above. I can't recommend Martian Panic, the game, but the blaster is a well-designed accessory that doubles as a fun toy. The Martian Panic Alien Blaster retails for $24.99 at Amazon and is available in a bundle at Game Stop.

The Martian Panic Alien Blaster and game were provided by the publisher for review.