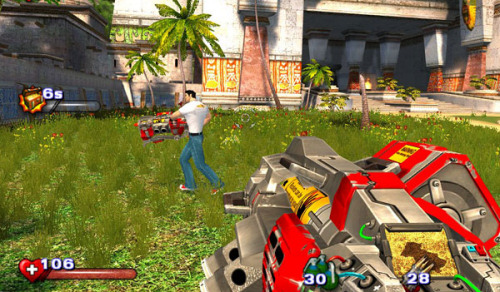 The Serious Sam games have always been about good mindless cooperative fun.  Not only is Serious Sam an entertaining franchise, it's also a showcase for Croteam's Serious Engine.  It's been a few years now since we saw Serious Sam II but it appears everyone's favorite self promoting t-shirt wearing hero is about to make a comeback, and he's bringing a new 3D engine with him.

According to the official Croteam website they've been hard at work on two new games, one of them being a sequel to Serious Sam.  A third game has been put on hold as the publishing deal with Gamecock has fallen through.  Finally a brand new Serious engine dubbed "Serious Engine 3"  is being used for both projects and is sure to showcase some next-gen visuals.

We hope they stick close to tradition as all the Serious titles have had strong co-op support with at least four player co-op or more available in the various PC and console editions of the game.

They go on to state that there is still work to be done on the game, so there's no firm release date yet.  We'll let you know the second we hear anything about the Serious Sam III or even their other secret project, as long as it has co-op of course.