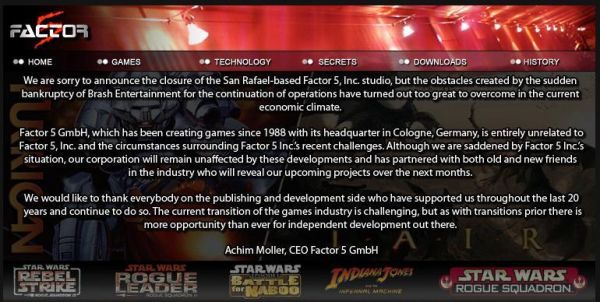 At the start of 2009, our politics tag was fastened to a great many news posts here at Co-Optimus, and the reason was a horrible rash of layoffs and closings.

Factor 5 -- developers of Lair, a rumored Superman game, and the excellent Star Wars: Rogue Squadron series -- was reported to have cut its staff in half...now, the studio has officially announced its full closure, not one week after Screwattack's nostalgic tribute to the original Rogue Squadron for Nintendo 64.

We are sorry to announce the closure of the San Rafael-based Factor 5 Inc. studio, but the obstacles created by the sudden bankruptcy of Brash Entertainment for the continuation of operations have turned out too great to overcome in the current economic climate.

Factor 5 GmbH, which has been creating games since 1998 with its headquarters in Cologne, Germany, is completely unrelated to Factor 5 Inc. and the circumstances surrounding Factor 5 Inc.'s recent challenges. Although we are saddened by Factor 5 Inc.'s situation, our corporation will remain unaffected by these developments and has partnered with both old and new friends in the industry who will reveal our upcoming projects over the next months

We would like to thank everybody on the publishing side and  developing side who have supported us throughout to last 20 years and continue to do so. The current transition of the games industry is challenging, but as with transitions prior there is more opportunity than ever for independent development out there.

While the studio was renowned for games that were primarily single-player only, their expertise in creating a timeless atmosphere carried throughout their catalog. Star Wars Rogue Squadron III: Rebel Strike pandered to multiplayer fans with a one-vs-one splitscreen mode, and by offering the entire campaign of its prequel in splitscreen co-op. I have a special place in my heart for the flight combat games of Factor 5, and for years they had been teasing the public with notions of space dogfighting online.

Alas, that dream is shattered. As our own Nick Puleo once said, "Layoffs are NOT co-op."