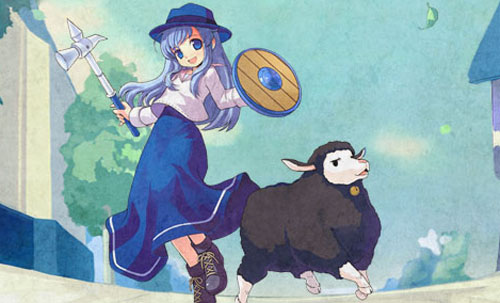 For This Week in Co-op, Mike and Tally played free MMO Mabinogi. Oh yes, foxes were upper-cut, bugs were found, and amazingly inane cutscenes were witnessed. Yup, standard free Asian MMO written all over this one.

Mabinogi is an anime-style game where, as far as we can tell, you go around beating up helpless wildlife and entering buggy dungeons. We had the slashing and maiming of said wildlife down, but the dungeon we tried to enter was sadly hopelessly bugged. We're quite certain that Mabinogi has its charms - lord knows, there are apparently some people who play it, so there must be some fun and interesting things to do; however, we're sad to report we saw very few of these hypothesized charms.

What did we witness? One patron saint with impressively (and horrifyingly) bouncy breasts, roosters and raccoons engaging in a never-ending struggle for power, owls that assaulted us with quests, and a fabulously clear interface where it took us a good 5-10 mins figuring out how to get us in the same party. Mike's illustration of said undying battle between Rooster and Raccoon (which we've lovingly named RvR) may fool you into thinking that we experienced wall-to-wall non-stop action. Do not be tricked, we most certainly didn't. We don't be any means want to bash the game (there may be some of you that happily play this game, and perhaps you can give us some insight of gameplay down the line that's actually exciting), but we were left with a somewhat unfavorable impression. Don't get us wrong though, it was extremely amusing, and in a way it's extremely refreshing to play an MMO that (as far as we could tell) does not take itself too seriously.

If you're interested in Mabinogi, of course go and check it out because our impressions are probably small and insignificant, but we writes it as we sees it here. If you do that, please be sure to let us know if later on in the game you're able to pick one side of the RvR battle to gain reputation/faction with, because that - that would just be awesome.