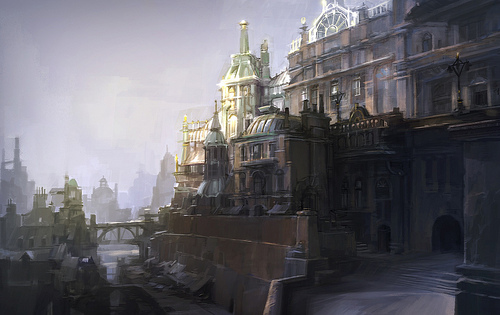 Ruffian Games, the developer behind Crackdown 2, has some rather interesting teases for what could be their next game. Last January, the Scotland based team was in search of some more programmers to help them work on some "really exciting, high action, visceral titles that are heavily focused on online [components]." Speculation began about what their next game might be, if it would have co-op, and if it would be another Crackdown title. Now, word comes from Ruffian that the company has "signed a major contract with one of the biggest publishers in the industry."

In August, Ruffian posted quite a few images on their flickr page that show off sketches of buildings and locations with a distinctly Victorian flair. One of those images showed off a "steampunk brawler" designed by one of Ruffian's Lead Artists, Paul Large. Sadly, Paul's posting about that image seems to indicate that a game set in an alternate Victorian history isn't what Ruffian's working on anymore, but all hope may not be lost.

Based on recent job postings on Ruffian's site, it seems the developer is looking for a good chunk of an art department with an Art Director and several Environment Artists. While "Crackdown in a steampunk setting" may be out, hopefully something new, and, more importantly, co-op friendly, is in the works and we'll have some word about these projects soon.