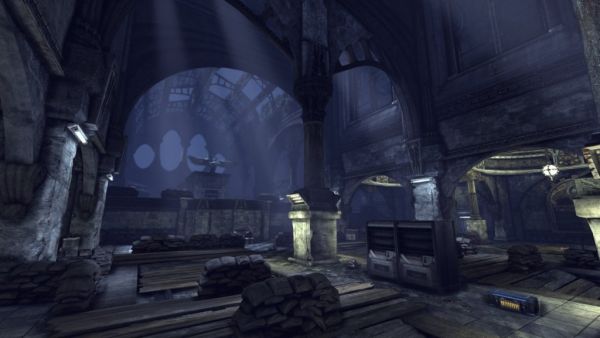 With the recent release of the Gears of War 2 All Fronts Collection, we saw a title update which added numerous cooperative achievements to the game. Not only were there three available for the story based content, but an additional dozen for Horde mode on the new maps. Me, being the gamerpoint loving son-of-a-bitch I am...well I just had to have these.

Kat volunteered to be my wing-woman through the Dark Corners content. Having played it the night before, she was already a seasoned veteran. She said something about "not on hard" difficulty, but I'm a man. A men like it hard. Or something like that. It wasn't long before we snuck are way through the Locust compound, free'd a loud mouth side kick and kicked some butt. Two achievements unlocked.

Upon looking at the achievement list, we noticed a few horde based challenges that only required players to make it to Wave 10. Surely we could do this with two players, especially since I had my golden lancer of destruction with me. We chose the War Machine map, a remake from Gears 1, and dug in for some killing.

We quickly surveyed the map to find a suitable location to hole up, and after wave 2 we thought we'd be just fine in the one corner area. But when wave 4 hit we died, and along with it our sniper rifles and boom shots. We slowly crept up to wave 7 utilizing our corner spot before we realized it just wasn't going to cut it. We were too exposed and when we got over run we usually found ourselves too split up to revive our fallen comrade. That's when Kat discovered a nice one way room with some steps, the perfect spot for setting up shop and completing this challenge. The strategy was simple - we each held a side of the doorway, and covered each other as we went out for rounds of ammo, grenades and new weapons. We were constantly yelling out enemies locations and types.

"Two Grinders coming from the right."

This seemed to work well until Wave 9. Then we snuck a little too far out of our safety hole...and they spawned behind us. Thankfully we made quick work of the few that spawned and continued on. We realized we had to concentrate on the Kantus as soon we we saw them, since they revived their fallen comrades, so that became our initial focus whenever we saw or heard one. It wasn't long until we hit wave 10, the infamous Blood Mount wave.

We had built a formidable shield wall in our entrance, one we hoped would stand the test of the horde. But it didn't last, and soon the chaos consumed us. Now with no weapons, no shields, and a poor spawn location - we had to do it again. Luckily we managed to snag two mulchers rather quickly which helped make mince meat of the oncoming horde. We quickly resumed our spot in the doorway. There were a few tense moments, and a couple of times someone screamed like a girl...it may have been me, but in the end we triumphed. Wave 10 was completed and we got that glorious ding we crave so very much.