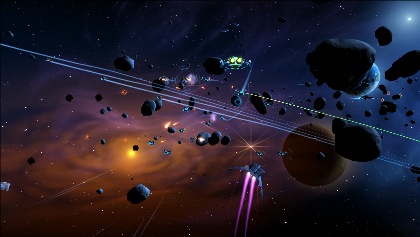 Aces of the Galaxy for the Xbox Live Arcade kind of came out of nowhere for us here at Co-Optimus.com.  That's not necessarily a bad thing, but hopefully this title doesn't get overlooked by player.  Gorgeous visuals, a great soundtrack, and fast and frantic gameplay all await you in Aces of the Galaxy (not to mention a badass pause screen) - but is the game worth your hard earned Microsoft Points?

Find out in our review.

The Co-Op Experience: Team up through the single player game. Each player controls a ship.3-2-1 blast off! Launch yourself into the intense space-shooter Aces of the Galaxy™, a non-stop, old-school arcade thrill-ride for the twenty-first century and beyond. Utilize an impressive arsenal of upgradeable weapons including high powered missile launchers, devastating torpedoes, and the ever-reliant chain gun to annihilate the ships of the wretched Skurgian Empire. Save planet Earth cooperatively at home with a friend or join up on Xbox LIVE®. [XBOX.COM]