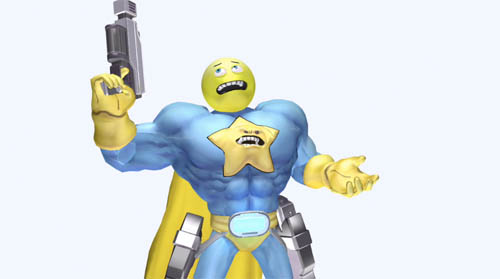 As we noted in our review of Splosion Man for the Xbox Live Arcade, there was some issues with lag while playing online.  It seemed over time the game got de-sync'd and eventually would render it almost unplayable.   Good news as Twisted Pixel's Josh Bear confirmed to me today at PAX 2009 that a patch for the game is in certification and that it should fix these issues that have been plaguing it.

Josh also snuck us a sneak peak at their upcoming game called Comic Jumper.  The platformer puts you in the role of a super hero who can jump in and out of different comic books, adjusting is style depending on the art style of the comic he's in.  The trailer is absolutely hilarious and we suggest you give it a watch.  No official word on co-op, but we've been told to keep a close eye on it!