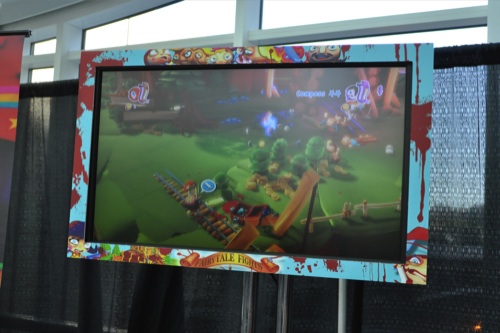 If we were to judge a book by it's cover, Fairytale Fights would appear to be all too full of bunnies, flowers, and everything nice. Fortunately for us, Playlogic took the fairytale angle and ran in the opposite direction with it. Fairytale Fights encourages you to slaughter giants, skate on blood, and have the best time in the many fairytale provinces possible.

We got our hands on both the Xbox 360 and PlayStation 3 versions of the game. It's worth noting that both versions of the game were as identical as two games on separate systems can be - they played the same, had identical level builds, and were visually twins. Four player co-op means four main characters; Red Riding Hood, Jack (and The Beanstalk), Snow White, and The Naked Emperor ('s New Clothes). Each player can pick up any of the 100 or so weapons throughout the game, that includes: stabbing swordfish, dicing with chainsaws, shooting with muskets, and 96 other things!

When playing the game, you'll use your left analog stick to move around, and your right analog stick to attack in whichever direction you move it, similar to Too Human. This style of control only took a minute to get used to, and worked very smoothly through the game with enemies attacking from all sides. As you attack enemies and break things in the environment, you'll pick up coins to cast into wishing wells for weapons or potions in exchange. Potions can either be thrown at enemies to stun or harm them, or consumed for a personal bonus effect - I was only exposed to a love potion, which stunned enemies when thrown, or turned me invincible if I drank it.

Visually, this game isn't just a cartoon - a lot of work went in to Playlogics own proprietary volumetric liquid system, as well as the dynamic slicing of your enemies. The Volumetric Liquid system unique to Fairytale Fights dictates how real the fluids in this game work. Blood is thick and coagulates as real blood will, water splashes and moves the way water does. The Dynamic Slicing system comes in to play a lot, as you will be doing a lot of slicing and dicing. When you hit an enemy, you'll be chopping them up like a Ginsu knife commercial, the pieces of their bodies will split and separate in whichever direction they are hit.

This makes slicing weapons the most attractive and sought after weapons in the game, especially amusing through the picture-in-picture displays you get periodically when hitting your enemies. The best way to get this picture-in-picture display was to build up an attack meter by stringing combos or not being hit while attacking to unleash a major volley from whatever weapon you happen to be holding. Your character will slice and dice for a good 30 seconds without interruption, utilizing the dynamic slicing to it's full potential.

One of the biggest questions I had in the game came from playing co-op and accidentally beating the snot out of my co-op partner (and vice versa.) I was pleased to learn it is possible to turn the friendly fire on or off, depending on your own personal level of cynicism.

Fairytale Fights worked hard to do everything in a different way than it had been done before. Aside from the level of gore in a cartoonized fairytale game, this also applied to the way the game works. Fairytale Fights is a side scrolling brawler in the vein of Marvel: Ultimate Alliance, with a heavy emphasis on platforming elements. You'll spend as much time dicing enemies as dodging circular saws and trap doors, adding a lot of depth and variety to the gameplay.

Being a full retail game, one has to wonder what all was crammed into this title. I'm here to share that there will be approximately 10 hours of gameplay, with several Fairytale stories fleshed out in this platforming style. Each of the 4 main character stories are included, as well as several other recognized characters. These levels are all very different in the way they look, and will have their own unique enemies to throw our way. We can also look forward to seeing other playable characters and chapters via DLC after the games release (no details yet, but we promise to pass on more info when it becomes available.)

This game would be recommended for any type of gamer, hardcore or casual, so the punishments for dying aren't too extreme. You'll lose your weapons, and be out of the game for about 10 seconds - but no other punishments come from being walloped by woodsmen. Where the punishment for dying isn't terribly extreme, the gore and humor in this game is extreme with extra X's. I'd have to say skating around on pools of blood between enemies will never get old, and I'll spend quite a bit of time on that aspect of the game.

This game was completely brilliant to play. I laughed out loud at a lot of the quirky little jokes, had a lot of fun swinging at enemies and figuring out how things worked, and I look forward to playing the full version of this to see where they go with all of these different fairytales! Subtle Fairytale jokes, like having Mirror, Mirror (on the wall) be your friendly guide through the different levels, brought the kid in me out to play again. I really stand by the fact that all age groups, genders, and types of gamers will enjoy this game quite a bit, and should at least give it a shot!

Bottom line, this game is pleasantly deep and varied in it's gameplay. It won't be the standard brawler or platformer, mixing things up often enough to stay addicting for long periods of time, with loads of other goofy things to do along the way as well!