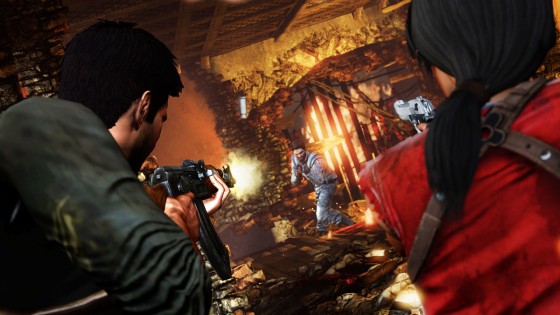 "The treasure is in the plaza" says Nathan.  All that stands in our way is a gigantic swarm of enemies that will lay their life on the line to protect it.  Or perhaps they want to steal it themselves?  No matter, our trio will shoulder on and steal what is rightfully ours.  If a few goons go down in the process, the world will be a better place for it.

The war torn streets of Nepal are no place for a lady, but I'm no ordinary woman.  My knee high boots not only look sexy, but keep me agile and protected when raiding tombs of ancient explorers.  My high cut, near sleeveless red shirt is perfect for a quick draw of the gun, and having been with Nathan around the world a few times, I know that skill will come in handy.

We quickly made it down an alley, and were ambushed by our first set of goons.  Dispatching them was a cakewalk, and the obstacles that stood in our way were conveniently vaulted by the use of broken bookshelves.  I think Nathan was trying to show off to me when he single handedly lifted a beam for Sully and I to walk under when our path was blocked.  I kinda liked it, so I let him know with a friendly slap on the ass.

It was then we met our first challenge, a gigantic armored man with a Gatling gun and a mean streak.  I'm not sure who pissed in his cheerios, or why our enemies decided to enlist him to protect this treasure - but it only fueled my desire to see what lies ahead.  Nate, Sully and I all unloaded on him.  I used the Dragon Sniper from a safe distance, Sully tried to move in close with an SAS-12 shotgun, and Nathan...well Nathan was diving around and firing off the last rounds of any gun he could get his hand on. After dispatching the large foe, it was only fitting that one of us grabbed his rather large gun.  Both the boys declined, and left it up to the 110 pound woman.  I didn't mind.  The next batch of goons did.  I enjoyed the purring of the gun as it revved up to fire and as it unleashed a hailstorm of almost liquid metal into the pour saps ahead, I couldn't help but call out, "I got one!"

After winding our way in and out of buildings that overlooked the beautiful, yet destroyed, city we saw our goal.  In the center of the plaza stood a large building draped with Corinthian Columns.  While at one time it was a place of worship for the people of this city, it was now holding a humongous, yet conveniently placed arsenal of rocket launchers, machine guns, sniper rifles and ammunition.

Just as Nate attempted to snag the "treasure," a gigantic golden mask that looks like the top of a American Indian Totem pole, the ambush started.  Those munitions within arms reach sure came in handy.  My gun purred like a kitty on a cold night next to its master.  There we explosions, there were bullets, I think I even heard a few screams of terror from the enemy.  After what seemed liked a dozen waves of enemies from all sides, the goons finally gave up.  The treasure was finally ours.

Now how the hell are we going to split this thing in three?