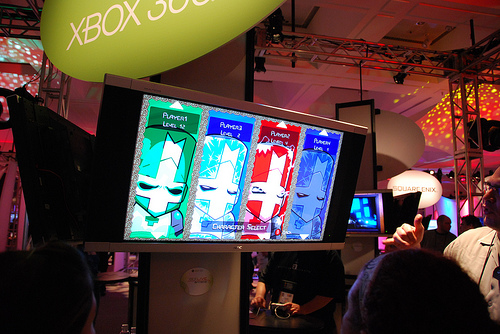 If there was one good thing to come out of E3 2008 this year (despite the bad), it's the fact that co-op has been moved up from an afterthought to a bullet point. Right from the get go at the Microsoft Press Conference we were hit with a plethora of AAA titles all that featured co-op as a major bullet point. Fable 2 and its integrated co-op mode to 3rd party titles like Resident Evil 5 and the official unveiling of its coop focused gameplay, the Microsoft press briefing had one overwhelming message - it's good to play together. Sony followed suit with titles like Resistance 2 and its 8-player co-op mode on display; and even though Nintendo didn't show much their big game Animal Crossing for the Wii was built around cooperative play, even introducing a new microphone peripheral for online play.

If you've seen our list of hands on impressions you know there are some really quality titles coming out with cooperative play. That list isn't even half of all the co-op games that were on display at E3 2008. We covered Gears of War 2 and its brand new 5 player co-op mode called Horde. There was Resident Evil 5 which we couldn't even get in to play because it was so popular. Of course don't forget our detailed coverage of Left 4 Dead and all it's zombie goodness.  And there were tons of other titles we didn't even get to see like Geometry Wars 2 and numerous others.

Yes, the co-op gaming trend is finally here. It's even garnered attention from mainstream sites like CNET.

This is an important trend because it ties gamers together, no matter where they are, making the experience more meaningful for being less of a solo thing. And this, clearly, is the promise of connected play on systems like Xbox Live and, the PlayStation Network.

Besides the mainstream media, it's the upper level execs of these major publishers that are talking up cooperative play. Listen to Evil Avatar's Day 1 Podcast of E3 and stay around for the after show where we have audio from the blogger brunch with Xbox Live General Manager Mark Whitten and Xbox Exec Aaron Greenberg. Both of these excecs mention cooperative gameplay a few times and the focus on it, even overhauling the Xbox 360 Dashboard with an 8 player party system to make it easier to facilitate play. Jack Tretton of Sony made sure during their press conference to mention the unique aspects of co-op play while presenting Little Big Planet, Resistance 2 and others.

So while E3 may as a whole have been somewhat of a bust, there was some good news out of it. Co-op play is here and it's being recognized as a major feature in games. It's no longer relegated to an "oh yeah we have that" feature, but rather a bullet point on the back of the box. It should be an exciting rest of the year for co-op video game fans, I know I'm psyched!