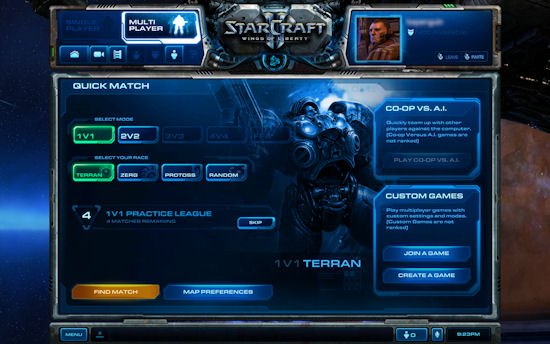 The StarCraft 2 closed beta launched today, and with it thousands...nay...millions of fans continuously hit F5 on their inbox checking for an invite.  Sadly the beta is pretty limited at this time, so there were lots of disappointed folks, but we managed to sneak a peak at the game and found some interesting things.

While the campaign of StarCraft 2 won't be support co-op, the good news is the multiplayer options have special sections designed for co-op play.  In fact, you can see from the above screenshot that Co-Op Vs. AI is called out right on the main matchmaking page!  If the recent Battle.net preview is any indication we can also expect further co-op support in the game, including co-op achievements.

Sadly it seems the only co-op available is "comp-stomping" - which basically means humans vs AI in a versus style setting.

Currently the beta only supports 2 player co-op but we imagine when the full game launches or in future betas the maps will support more players.  Here's the system requirements for the Beta to get an idea if you need to visit NewEgg or not to upgrade your rig.  You might just want to upgrade your PC anyway, it's been a few weeks.

The minimum system requirements for the Starcraft II Beta are as follows: