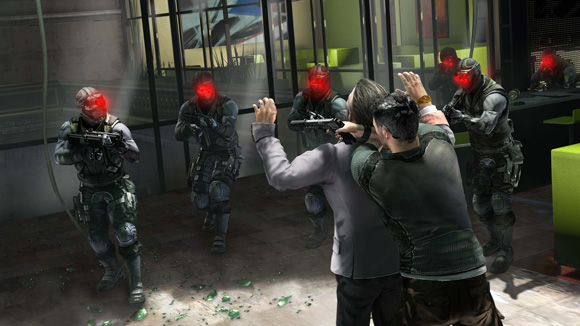 Co-Op gaming has come a long way since I started this site over two years ago, there's been ups and downs along the way, but every once and a while you know it's a good day to be a fan of cooperative gaming.  Gamasutra has posted an interview with Splinter Cell Conviction multiplayer designer Patrick Redding in which he discusses just how big this whole co-op thing has gotten, and is going to be.

So who is Patrick Redding and why did he design a co-op campaign in Splinter Cell Conviction?  I think this sums it up pretty nicely.

PR:  Quite honestly, the main attraction for me -- aside from the fact that it's Splinter Cell, and I specifically love Splinter Cell co-op -- is that I really believe co-op represents the new center of gravity for mass-market gaming. I think people want these kinds of experiences that are narratively rich, that have a lot of interesting kind of depth and authorship attached, and all that other fun stuff that people talk about when they play Modern Warfare; but I think they want to share that with someone. I don't think they necessarily want it to be a solitary experience.

The six page interview covers a variety of topics, including Splinter Cell Co-Op, but also covers how game designers are dealing with the changing face of interaction of players with a virtual world.  For one, designers are challenged with just tacking on a co-op experience or creating a game designed entirely around it.  It's something we've seen in games that offer co-op in the form of a survival mode, like Aliens vs Predator, or a full co-op campaign like Gears of War.  Then you have games that go the extra mile and implement both a co-op specific mode and a co-op campaign like Gears of War 2. Gears of War 2 not only had a co-op campaign, but a 5 player co-op Horde mode.

So why do we see such variety in these games in terms of cooperative offerings?

Yeah. I think that, commonly, you get this phenomenon: "We have a single-player game, and people like to play with their friends, so let's reuse some the maps and some of the setups, and maybe put a different path through it and beef up the number of enemies." Maybe you also mix in slightly different ingredients so it's fun for two players. That's the tried-and-true approach. It works; you can ship some awesome games that way.

Which brings us to the holy grail of co-op games.  A full experience designed from the ground up for two players.  It's something we've rarely seen executed because of the risk.

The other way you do it -- and it's the more expensive way, but ultimately [the way] that allows us to explore some things mechanically that are unique to co-op -- is you say, we are going to have unique content, unique maps, and level design that is really two-player oriented level design. We're going to have scenarios and gameplay moments -- whether it's exotic gameplay or mini-games or even just core gameplay -- that is really designed to implicate two players or three players or four players or however many it is; and we're going to build a story around that to help justify it.

That's what we did here.

The team looked closely at a lot of co-op titles that came out recently for inspiration; Army of Two, Left 4 Dead, and Gears of War were mentioned.  The Splinter Cell Conviction team really wanted to deliver not only a great four player co-op arcade style modes online, but a rich narrative in the two player co-op campaign.  This of course, presents some interesting design decisions that perhaps a lot of co-op gamers take for granted. A simple event in a game needs to be examined from a design standpoint.  What happens if only one player sees it? What happens if both players need to see it? How can we give the information to the player?  These kind of questions are rarely thought about from a gamer's perspective, but they constantly perplex developers.

Another interesting concept is how to tie how the in game characters act in relation to the people controlling them, or in co-op game's case, how the team works together.

In the same sense that the players haven't necessarily mastered the mechanics of the game, haven't mastered cooperating with each other, haven't learned how to be efficient as a team -- Archer and Kestrel also haven't done that.

This interview is a great read for anyone, as Patrick and Gamasutra's Chris Remo go on to discuss other concepts in games in general.  One particularly interesting thing is how as technology has given more players freedom, it has also approached the uncanny valley in terms of gameplay.  The lack of freedom to do certain thing breaks the immersion, despite players having freedom far and away greater than anything they've been able to do before.