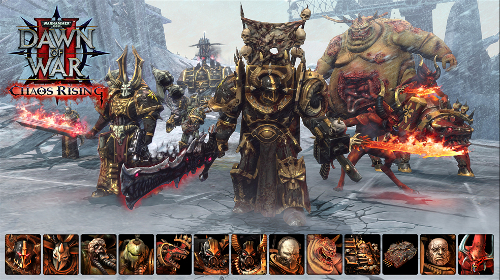 While there are certainly enough new releases these days, of both the co-op and non-co-op variety, to keep a gamer busy for awhile, some of last year’s best co-op titles are seeing new life these days with expansions.  Chaos Rising, the first major expansion to last year’s excellent co-op RTS title Dawn of War 2, arrived last Thursday and we could hardly wait to check out all of the new features it added.  Those looking for a great add-on piece to an excellent co-op game won't be disappointed by this expansion, but players who are seeking a bit more than a fun diversion may want to think about holding off until the price drops a little.

Despite saving the Aurelia sub-system from the Tyranid invasion in Dawn of War 2, the Blood Ravens’ troubles are far from over.  The planet Aurelia, a planet that was last seen being pulled into the corrupting parallel universe known as the Warp, mysteriously reappears and your squad of Blood Ravens is called upon to investigate it.  The return of the planet does not bode well for our heroes, as it brings with it the terrifying might of the Chaos Space Marines, an enemy force that combines the technological might of the Space Marines with the demonic legions of Chaos.  As with Dawn of War 2, facing these new enemies of the Imperium is a lot easier, and a lot more fun, when you have friend to back you up.

To address the actual gameplay and co-op experience first, not too much has changed with this expansion, which is both good and bad.  The co-op experience as a whole is still great and still requires a great deal of coordination and communication between you and your co-op partner in order to succeed (especially on the harder difficulty levels).  However, some of the issues we had with Dawn of War 2 (i.e., campaign progress is saved for the host only and no co-op matchmaking) are still present in Chaos Rising.  As an expansion, Chaos Rising is more about the new features it's implemented than being a big game changer.

Update: As John pointed out in his comment, playing the game co-op does bring with it some additional rewards in the form of unique gear.  This gear does carry over to the joining player's account, so it's definitely a nice bonus and ensures there's something for everyone this time around (aside from the joys of co-op, that is).  Leaving this detail out was an oversight on our part and we apologize for the confusion.

Perhaps the most interesting new feature that Chaos Rising adds, the corruption system, presents an interesting mechanic to the campaign progression as certain actions, or inactions, will cause your squads to become more and more corrupted.  The results of these decisions allow access to new gear and new abilities, if you allow the corruption to build enough, but it will cost you eventually.  If you wish to keep your group of Space Marines pure in their devotion to the Emperor, you’ll have to perform redeeming tasks in the missions, such as destroying a Chaos temple or preventing strategic points from being taken, in order to remove any corruption they may have been earned previously. Jonah's psyker abilities allows for new strategies, though you don't get to try them out as much as you'd like

Speaking of squads, Avitus, Tarkus, Cyrus, and all the other familiar faces from Dawn of War 2 have returned to purge the heretics.  Importing a completed Dawn of War 2 campaign gives you access to all of the equipment they had equipped when the campaign ended, which helps give you an early advantage against the forces of Chaos.  You’ll also be able to reassign whatever combat points you’d previously assigned in order to change things up a bit, which is a great feature as some of the new skills that have been added as a result of the new level cap make for some interesting new combinations.  A new unit has been added to the roster as well, Jonah Orion the Librarian.  This unit is essentially a magic-user that has a variety of “spells” from which he can use depending on which of his combat skills (Stamina, Ranged, Combat, and Willpower) he levels.  While some of his spells can pack quite a punch, the length of the expansion – just 16 missions, which can roughly be completed in about eight hours – means that you won’t have much time to really get a feel for everything of which he’s capable.  This sentiment also pretty much applies to expansion on the whole: some great new things for you to check out but you won’t really have enough time to get the most out of them.

For fans of the Warhammer 40k universe and Dawn of War 2, Chaos Rising can almost feel like a cruel tease at times.  The brevity of Chaos Rising's campaign paired with the great, new material leaves you feeling like you’ve either played through a fairly extensive demo of some future game (is it too soon to want Dawn of War 3?), and/or wishing that the rest of the game was like the expansion.  If you are a fan, though, it’s completely worth it and $29.99 price point isn’t something at which you’re likely to balk.  For everyone else, you probably want to wait until it has dropped in price a little as a result of some sale or special deal.