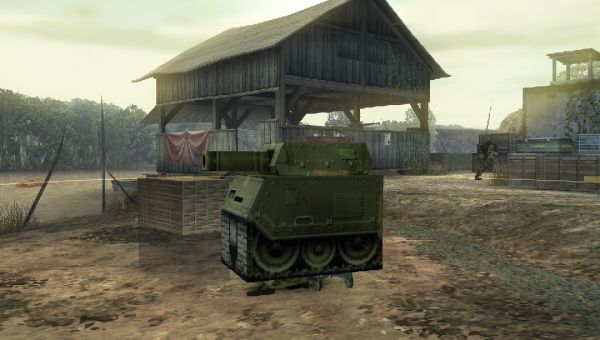 Back in early February, we got word that the Japanese version of Kojima's latest entry in the Metal Gear Solid series, Metal Gear Solid: Peace Walker, was delayed.  Unfortunately, we didn't have any word as to what that meant for the U.S. release of this four player co-op "sneaking mission," so we were left to speculate if it would be May, June, or even later that.  Well, Konami announced today that Snake and his buddies will finally be making their way to the U.S. on June 8th.  What's more, the game will support the new adhocParty Mode, so you'll be able to get the drop on those enemy soldiers with your friends no matter where they may be hiding themselves.

METAL GEAR SOLID: PEACE WALKER will be available for PSP and PSP®go and will support the new adhocParty mode, which connects PSP systems via a PlayStation®3 system, allowing players to use the game's multiplayer mode online. The famous Metal Gear series is considered as a benchmark stealth series, which sold more than 27.7m copies (as of December 2009) worldwide since its debut in 1987.

METAL GEAR SOLID: PEACE WALKER boasts stunning visuals, remarkable enemy AI, and a fresh, exciting plot that will delight and surprise. In addition to solo operations, players can team up via the game's multi-player CO-OPS (CO-operative OPerationS) mode. This extends to key gameplay advances, with players administering medical help to colleagues, sharing munitions, or providing cover for each other using the Snake formation to cover each other's blind spots.

"The METAL GEAR SOLID series is heading into exciting new areas, and METAL GEAR SOLID: PEACE WALKER unites the series' key gameplay elements with even more tactical possibilities," enthused Hideo Kojima, Head of Kojima Productions and creator of the METAL GEAR SOLID series. "We look forward to recruiting PSP users to Snake's latest mission, as the Metal Gear Solid series returns in a guise that will constantly surprise the player."

METAL GEAR SOLID: PEACE WALKER will be released exclusively for the PSP® (PlayStation®Portable) system and PSP®go in North America on June 8th, 2010 at an SRP of $39.99. For more information, please visit www.konami.com/mgs

Jim's impressions of the demo that he got to spend time with last fall were certainly favorable, specifically mentioning how some of the co-op features "hearken to Army of Two."  As a long time Metal Gear Solid fan, this may be the title that gets me to finally pick up a PSP.