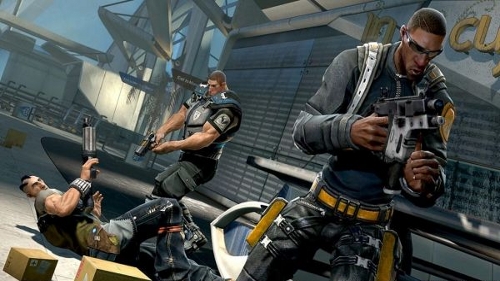 It's fair to say that many of us around Co-Optimus HQ (which will be undergoing a few renovations soon) are a wee bit excited about Splash Damage's and Bethesda's upcoming co-op title, Brink.  After all, the last cinematic trailer we saw had us making up all new words to describe the game's co-op.  Of course, while these kinds of details and reveals are nice, there's still been some questions about what players can expect out of the campaign.  Gamespot Australia recently spoke with Richard Ham, the game's creative director, about the game's background, how the experience system works, and the two campaigns players can run through.

When asked about the campaigns and whether you would play as both sides during a campaign, or if there are completely separate campaigns for each side, Richard had this to say:

At the beginning of the game, you decide which side you want to fight for in the Ark’s civil war. What’s interesting is that once you finish that campaign, the story will rewind, and you’ll get to play it from the other side. You’ll still use your same character (so you won’t lose all the progress you’ve made buying abilities and unlocking weapons), but you’ll be going through a completely different storyline and going on completely different missions.

While you’re going through either of these campaigns, you can jump around in the storyline at any time, however you want, and even jump campaigns if you prefer. Maybe you’re stuck on a tough mission and want to skip ahead; or maybe you saw a friend come online and you want to play with him, even though he’s on the other campaign. Or maybe you just finished a certain mission and you want to see what it was like from the other side, without having to wait until you eventually make it to the other storyline. The important thing is that we don’t tell you how to play the game; you make your own rules.

Personally, I'm really glad to hear that all the time I invest in a character is unilateral, and I won't have to start all over to unlock things if I decide to switch sides.  The "let's make them play through it again to unlock different things" method of game design has started to wear thin for me, so it always refreshing to hear a developer recognizes that a game's true replayability comes from the strength of the game itself, not from providing different unlocks for taking different actions.

As for the experience you'll earn for completing missions, Richard stated in the interview that it's not specific to a character's class, but rather it's up to the players to decide how to spend the experience from a shared pool.

It’s a shared XP pool. Because you can change your class at any time in a match, we wanted to give players the maximum flexibility to level up the way they want to. You might spend all your XP on becoming the best operative in the world, or you might spread it out amongst all the classes equally (soldier, medic, engineer, and operative). Or maybe you don’t get new class abilities at all and put all your XP into buying general abilities that help no matter what class you are. The choice is all up to you.

Richard goes on to discuss the game's SMART system, which dictates what action your character takes when presented with an obstacle in their path, and how a good co-op team utilizes all of the different classes, though having a few of the same classes doesn't hurt.  The full interview is well worth a read, though it continues to leave us with the "can we have it already" feeling that's plagued us since we first heard about the game back at PAX.  Fall 2010 isn't that far off... right?