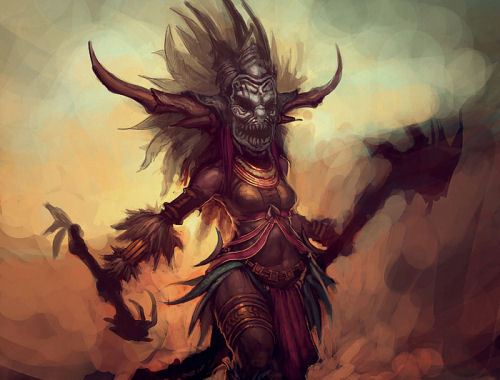 The last of the genders for our Diablo 3 characters have been revealed, this time the female version of the Witch Doctor graces us with her creepy presence.  So far we've seen the Wizard, Monk, and Barbarian.  There's still one entire class that's yet to be revealed for the game, both male and female versions.  Along with the above concept art we've received a fresh batch of screenshots as well.

Any bets as to who, or what, the last class will be in this four player co-op title?  My money is on some sort of Paladin type character that's a cross between the Barbarian and Witch Doctor.

Speaking of Witch Doctors...ting tang, walla walla bing bang!  Sorry, that'll be in your head the rest of the day, but at least it'll take your mind off of wanting Diablo 3.