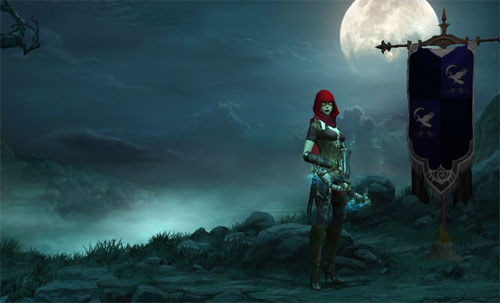 Rounding off our class coverage of the Diablo 3 beta is the Demon Hunter. The Demon Hunter is a pretty solid blend of Diablo 2’s Amazon and Assassin classes. She specializes in bows and crossbows as well as a variety of traps and trick shots. We’ll delve more into the specific skills later. First, let’s talk basic mechanics.

In Diablo 2, mana was a resource shared by all classes; however, in Diablo 3 each class has their own energy resource. The Demon Hunter actually has two energy resources: Hatred and Discipline. As such, the resource “globe” at the bottom right of the screen is split down the middle: the left half is red for Hatred and the right half is blue for Discipline. Accordingly, skills are divided into Hatred-consuming and Discipline-consuming skills (Note: on the official skill-builder site we told you guys about a couple weeks ago, it lists Hatred-building vs. Hatred-consuming skills, but in the current beta build I played, it was just straight-up Hatred-consuming skills). Hatred refills rather quickly whereas Discipline returns at a much slower pace. So while you can happily spam several Hatred skills in a row, Discipline skills must be used more strategically. This works out rather well as Hatred skills are mostly damage-dealing skills and Discipline skills are more utility.

Upon starting up a fresh Demon Hunter, players are automatically introduced to this dual resource system. You’re given Hungering Arrow as your Hatred and offensive skill and Caltrops as your Discipline and utility skill. Hungering Arrow is pretty similar to the Amazon’s Guided Arrow (they’re both guided and do pretty nice damage) with one awesome difference: Hungering Arrow has a base 50% chance to penetrate its targets. So yes, sometimes your arrow will hit an enemy, then magically turn around and hit them again. Awesome. Caltrops is a trap you can drop on the ground that persists for a short period of time. If an enemy steps in that area, the trap is sprung and everything in the field is snared. As your progress throughout the game and level up, you’ll be presented with new skills to choose from. Within the first several levels, these include Entangling Shot (a snaring ranged shot), Evasive Fire (shoot for extra damage, and back-flip away from the enemy), Fan of Knives (an aoe damage and snare), Bola Shot (a short delay explosive shot), and Grenades (throw a few grenades towards your cursor) on the offensive side of things. Utility-wise, you’ll gain access to Vault (a tumble/sprint that allows you to rapidly cover ground without collision) and Marked for Death (a short-term debuff that caused the marked to take an extra percentage of increased damage).

So what does a Demon Hunter bring to a team? First and foremost: the damage. Of course, all of the classes in Diablo 3 can dish out the pain, but the Demon Hunter is a ridiculously mobile fighter: flitting around, barraging arrows and explosives, all without hardly getting a scratch. In any good team there’s a member whose soul purpose is to demolish and destroy, and the Demon Hunter is a great pick for this. Second, Demon Hunters can help their team kite enemies around as well with their variety of aoe snares. Third, skills like Marked for Death can help your team vanquish named enemies and bosses faster. An added percentage of damage from four souped up heroes can be ridiculously devastating, believe you me.

How did I play my Demon Hunter? I stuck with Hungering Arrow the whole time as it took me back to my Amazon days. I picked up Vault later to kite around with ease. Horde of enemies closing in? Vault through them to the other side and begin click-spamming Hungering Arrow anew from your new point of safety! Last, I chose Marked for Death for named mobs and bosses to clean them up even faster.

The Demon Hunter was fun to play, though I am a little bummed that eternal skill favorites like Multishot and Strafe are some of the last skills the class acquires, thus I wasn’t able to test them out in the beta. The dual energy system is a fun twist on resource management as well. I certainly look forward to delving into the full release version of the Demon Hunter in early 2012.