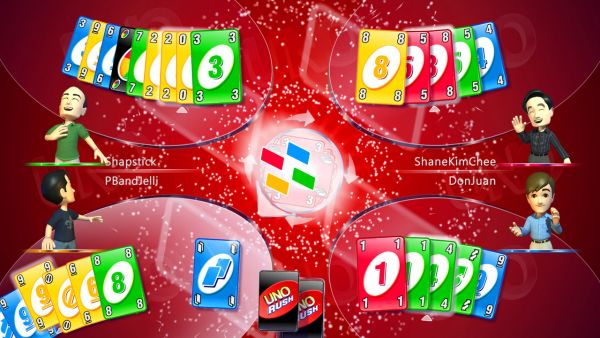 No, I'm not shouting - the name is literally supposed to be in all caps: UNO RUSH. So don't be a-scared if I type it like that. Does that mean that it doesn't ellicit high-fives and cheers of victory? Not at all: my wife and I seriously have good fun with this casual game.

This past weekend, I proposed a change to the recent Marvel: Ultimate Alliance trend. Not wanting to butt up against the ever-so-slowly, barely moving wall that guards my wife's fiercest non-gamer instincts, I opted against proposing Army of Two: The 40th Day Chapter of Deceit or Call of Duty: Modern Warfare 2 Spec Ops. Instead we fell back on an old favorite. It's funny how so many triple-A games are celebrated for having matchmaking, custom games, splitscreen online, etc. - or panned for the missed opportunities. Yet the ever-growing cache of downloadable casual games seems to get these things right. No matter how you filter your co-op game search on our games database, your results will be inundated with Xbox Live Arcade and PlayStation Network titles.

It's a testament to these games that when someone gets frustrated, there's a way to customize the experience. In our case, there was a prominent number of games that were set up to be extremely fast-paced with the rules optimized for the highest difficulty. Whether the hosts were trying to boost their scores or were gunning for a certain Achievement, it was irritating - to say the least - and near impossible to play. Custom game finder to the rescue! A quick jump to the menu, and we were able to tweak our game search. In fact, we ended up in a game lobby with another co-op couple, and were able to make a couple of new Xbox Live friends for future games.

This story is an example of what I love about casual games - the stakes are low, the fun is light-hearted, and there's no pressure to reach a certain point by a certain time. Furthermore: instead of waving off a nagging wife at the end of a stressful day of work, I can share my period of relaxation with her. My new surround sound system enhances the calm mood, and the vibrant primary colors make it easy to forget everything else.

My one suggestion for UNO RUSH: make it playable in the Xbox Live Game Room. It would be neat to have Phase 10 and Skip-Bo card tables in my arcade.