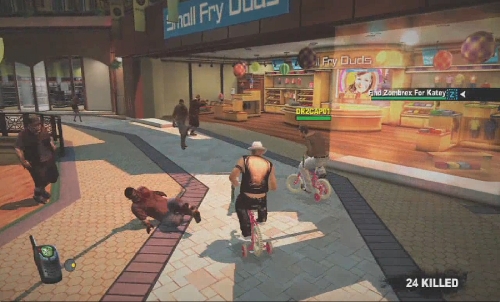 Zombies - they're every where these days, yet gamers just can't seem to kill enough of them.  Amidst the excitement of Left 4 Dead 2's The Passing DLC release, Game Informer has posted some new gameplay footage of Dead Rising 2 that features two Chuck Greenes taking out the zombie hordes cooperatively.  How, you might ask?  How about running them over with tricycles?  Does that do anything for ya?  The video is short, but it definitely had me laughing at the creative ways players will be able to team up to put the undead down for good, and itching to try some of these methods out with a friend.

Update: We've now included a 9-minute video of the co-op mode being demoed by two of the game's producers.  Thanks to TheReaperCooL for the link.

The producers show off a lot of the gameplay in this video and discuss some of the details we heard coming out of Capcom's Captivate event.

Game Informer's video is worth checking out as well, and leaves me to wonder if Chuck will be able to ride scraper bikes, too...