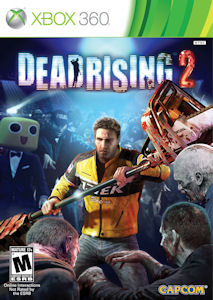 Capcom has just unveiled the official box art for Dead Rising 2, the upcoming two player co-op zombie slaying game set to hit the Xbox 360, PlayStation 3 and PC this September.  As you can see the customizable weapon system is front and center with a chainsaw boat oar kind of thing that's sure to make a mess of some poor zombies head.   There's also a guy in a tuxedo wearing a Servbot helmet.  So awesome.

Along with the box art is a new website called Tape It Or Die.  The site follows the exploits of Lance, Gretchen, Wallace and Johnny Pipe as they try obtain tickets for the hottest show in town, Terror is Reality XVII.  Signing up for an account and playing along promises to bring exclusive looks at Dead Rising 2.  It's a site that I think would make Tim "The Tool Man" Taylor proud.